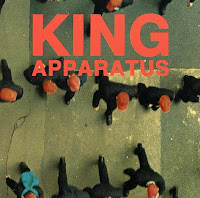 Editor's note: Shots in the Dark spotlights third-wave ska releases that should have been massive hits on the scene but, due to bad timing, poor luck, or a fickle record-buying public, were lost in the fray.

The Release: Despite their obvious musical debt to The Specials, King Apparatus were by no means imitators to the throne--Chris Murray's powerfully original (and often sharply angry) songs coupled with the band's super-charged delivery proved that they were the real thing: a world-class ska band. From the first manic beats of "Non-Stop Drinking" to the defiantly misanthropic "Heartless," King Apparatus grab hold of the listener with their intense, compelling, and incredibly catchy songs and don't let go (after listening to the album for this review, I keep waking up at night hearing "Break Your Heart" running through my head). It's like being buttonholed by Coleridge's haunted Ancient Mariner in a dive bar--Murray is fated to tell you his tales about good and bad relationships ("Wasteland," "Hangin' On"), bogus televangelists ("Live Feed from Heaven"), a false leader urging ignorant kids to launch a racial war ("Tom Metzger's Big Plan"..."an Aryan time bomb/it's gonna get him rich/but it'll get you arrested"), all the characters hanging around waiting to be seen in the ER ("Hospital Waiting Room"), imagining his life as a TV movie ("Made for TV"..."and Nina Hagen/if we can name her price/could play my mother, my sister, my wife") before he can release you into the night, but it's all so good you'll end up buying him a drink because you want to hear more. It's a terrific album that sounds just as good, if not better, in 2008 as it did in 1991.

The Sad Circumstances: Originally released on Raw Energy Records in Canada in 1991, King Apparatus' self-titled debut--a big hit for the band north of the border--was picked up for distribution in the US by Moon Records (basically Bucket working out of his basement and me doing promotions part-time, after work out of my kitchen). Unfortunately, at the time, the American ska scene was small, disjointed, and disorganized (the pre-Internet days, baby!)--and this record went largely unnoticed and unsold. Having said that, several college ska DJs did pick up on the release and added it to their playlists and the odd skazine reviewed it, but few ska bands could venture out on the road for a national tour in support of their record (the best way to promote it) without losing their shirts--the ska touring circut just hadn't been firmly established yet.

Availability: In print and available from Asian Man Records.
Posted by Steve from Moon at 10:35 PM