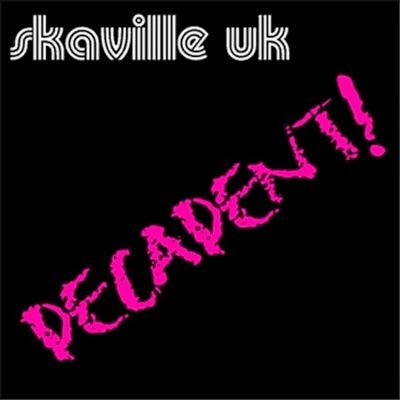 When Skaville UK's terrific second album opens with a fake radio broadcast of the the band doing their best New Romantic imitation of Martin Fry and ABC (posing as the band Leather Arcade doing "The Policy of Love," natch), you probably wouldn't be too surprised to find that Decadent (a word play on the excesses, musical and otherwise, of the glorious 80s) revels in skinny tie power-pop, day-glo new wave, and jagged post-punk music. Having said all that, Decadent is most definitely a ska record--we're just not necessarily on Orange Street anymore (more like Bleeker and Bowery).

"The Alternate," hands down my favorite song on the album, features the incredible Rhoda Dakar on a cut that sounds like an awesome mash-up of Gary Numan and the Tubeway Army with Echo and the Bunnymen (you've just got to hear it to realize how well they pull this off--give "The Alternate" a listen on Rhoda's MySpace page). "It's a Me, Me, Me Society" is Missing Persons meets Rebel Yell-era Billy Idol and features the great line "You're laundromatic/you clean your past so well." On these tracks and few others, you can almost picture Nicky Welsh, all smiles, as he borrowed bits and pieces of the musical language of the new wave era--the handclaps and background vocal harmonizing of The Cars for this song or a synthesizer riff plucked from Heaven 17 there--when he went about writing this album, but the songs are so well constructed that they completely sidestep parody or imitation and stand solidly on their own as fun and catchy original tunes.

Other highlights on Decadent include the hard-rocking, I've just realized too late what an a-hole I am "Bad Man"; "She's Mad About the 80s" ("Once she heard the Thompson Twins/she never was the same"); "The Inappropriate One," a song for that "special" person in our lives who both thrills and appalls us with the outrageous things they do and say; and the sweet, laid-back ska gem "One Way Street," which is about pining after someone who probably won't reciprocate your feelings, and was co-written and sung beautifully by Jennie Matthias (ex-Bellestars, who has interesting new ska/latin/reggae group with Lee Thompson and Dave Barker called The Dance Brigade).

Having been a teenager in the early to mid 80--and as a huge fan of new wave music in all of its permutations--I really dig Decadent, but not for any cliched nostalgic reasons like new wave was the soundtrack of my youth or they just don't make 'em like they used to rubbish. It's more like the soul-pleasing satisfaction that comes from hearing musical sub-genres being recombined, reinvented, and rejuvenated by very talented musicians in a manner that seems so natural and simple that an Acme light bulb should click on over your head the moment you hear it (as in "why didn't I think of that?)--except that its not (you need crazy mad skills and inspiration, obviously).

But, perhaps the biggest reason the blending of new wave and ska works so well on Decadent is that the distance between 2-Tone and the host of other non-mainstream musical styles that were huddled under the new wave umbrella in the 80s (punk rock, synthpop, electropop, early hip hop, Mod, power pop, New Romantic, etc.) just isn't that far. All of these underground/alternative music scenes spawned some amazing acts and stunningly good music that made (and continues to make) one hell of a good mix tape (if you were in NYC in the 1980s when WLIR was in full force, you know what I mean). That's what it boils down to: good music is good music, no matter its sub-category or hyphenation, and Skaville UK know how to make it in spades.

greeting ska from indonesia...love and respect!!!!

Thanks for your comment and for checking out the blog!