The NY Citizens in "Zoot" 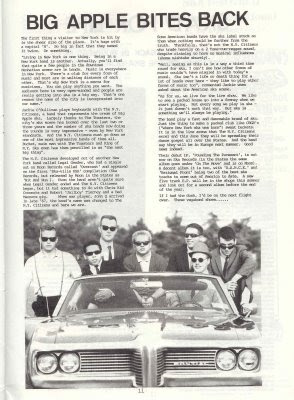 Over the weekend, I picked up a second copy of The NY Citizens' On the Move LP on eBay for about $11 (hey, I need a back-up in case something happens to my old one, you know they're not making these anymore)--this is not a release that you see too often for sale anywhere (the UK version of this album on Ska Records, Pounding the Pavement, is going for close to $120 on GEMM right now). This reminded me to exhume my "Zoot" skazines (put together by George Marshall who went on to publish "Skinhead Times") from the late 80s and early 90s, one of which contains one of the few articles on the NYCs that I've ever come across (click on the image at right to read George's piece on the band from "Zoot").

I actually reviewed On the Move for my college newspaper back in 1989 (gotta dig that out and post it here) and was surprised/thrilled to receive a letter of thanks from the band's guitarist (Dan Marotta), who happened to be going to my university's law school and caught the glowing review. At some point, I ran into him on campus and sheepishly introduced myself. Later that spring (May '89), The NY Citizens and Scofflaws (this was before their debut album was released--the only recording they had out was "Rudy's Back" on the Ska Face comp) played a gig with the Grip Weeds (power pop that didn't go over too well) at The Pyramid--an amazing show. Both The Citizens and The Scofflaws were on fire that afternoon--some of the best performances I've seen by either band. To give you a taste of what the NYC scene was back then, my friend and I were the only non-skinheads at the show (him in a boiler suit, me in a Toasters shirt and black jeans). Needless to say, we kept a low profile.

When the Citizens started playing, my friend and I worked our way up to just in front of the stage (a lot of the skins had come to see The Scofflaws that day and their ranks had thinned a bit by then). Sadly, I can remember skanking hard right in front of the guitarist, looking up trying to catch his eye--kind of a completely pathetic look-at-me-you-know-me-I'm-a-big-fan-of-the-band-you're-the-greatest moment. He must have thought I was a complete freak (sorry, man) and a little part of me dies every time I think about it. Definitely a low point in my ska fan boy-dom.
Posted by Steve from Moon at 10:07 PM

Do you have a complete discography for the NYC? I think I have the "On the Move" LP, and I have the career retrospective CD, but what else is out there?

And any idea what these guys are up to now?

I actually do have their complete discography somewhere in my apartment, which I will post tonight. If I remember correctly, there is the "Stranger Things Have Happened" EP (which came out after "On the Move" and I have on cassette), their cuts on the "NYC Ska Live" comp, and another single I think.

No idea what anyone in the band is up to right now. I used to be in touch with Chris "Kid Coconut" Acosta back in the 90s (he put together one of the "Latin Ska" comps for Moon)--and I may try to interview him soon for something I'm working on...

I loved those comps, they led me to Los Fabulosos Cadillacs, King Chango, Manu Negra, and Desorden Publico. Great discs.

Yep. They were great comps...but they sold very poorly. Moon just wasn't connected to the Latin market in the US at all and most of the ska crowd here just wasn't interested.

Andrew Blanco (AKA King Chango) did some CD artwork for Moon (the first Skarmageddon, "Dub 56," the reissue of "Skaboom," the NY Citizens' comp, and more). He definitely surprised us when he unleashed his group (on David Byrne's label, no less) and became a hit on the Latin music scene.