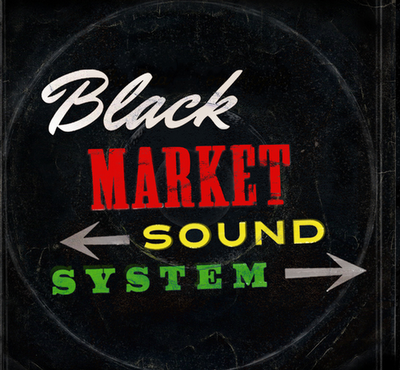 May Cause Dizziness Records
2011
7" vinyl single

Black Market Sound System--a group led by Sam Broke of Broke 'Til Thursday and comprised of punk musicians from various LA-area bands--is clearly inspired by The Clash's oftentimes muscular, but always spot-on and reverent and approach to reggae, as exemplified on the magnificent side two of the Black Market Clash EP (the perfect segue of "Bankrobber/Robber Dub," "Armagideon Time," and "Justice Tonight/Kick it Over").

Of course, punk rock and reggae have been forever bonded since the '77-era UK punks recognized that their defiant rejection of mainstream society was simpatico with the righteous determination to escape/destroy Babylon that fueled roots reggae. Clearly, both were rebel music. But there was also a familiarity and a solidarity of sorts between the white, working-class punks who had grown up side by side with the sons and daughters of the thousands of Jamaican immigrants who came to the UK (with their music and culture in tow) during the post-war years. Not only were both groups living in close proximity in the bleak tower blocks and council estates, they were ghettoized by--and alienated from--the larger, highly class-conscious and oftentimes racist British society that viewed both groups as outcasts (and formulated political policies against them accordingly).

And then there was the enormous influence that Jamaican music had on British pop-culture--as illustrated by the incredible popularity of skinhead reggae in the UK from around 1968-1971 (when over 20 early reggae singles reached the UK pop charts, including The Upsetters' "Return of Django," Harry J All Stars' "Liquidator," Boris Gardiner's "Elizabethan Reggae," Dave & Ansell Collins' "Double Barrel" and "Monkey Spanner," Desmond Dekker's "Israelites" and "It Mek," Max Romeo's "Wet Dream," The Pioneers' "Long Shot (Kick De Bucket)," Bob & Marcia's "Young, Gifted, and Black" and "Pied Piper," the Melodians' "Sweet Sensation" and Nicky Thomas' "Love of the Common People"). The soundtrack of all of the young punks' formative years was filled with bluebeat, rocksteady, skinhead reggae and roots reggae (including home-grown reggae from groups like Matumbi and Aswad) blasting out of their transistor radios or dansettes (which also would heavily influence all of the 2 Tone ska bands, who ended up extensively covering the original JA artists). So it only follows that the punks would be predisposed to liking roots reggae and its dread message--and many punk musicians like The Ruts, The Slits, and, of course, The Clash heavily incorporated reggae into their mix. (It's interesting to note that both punk and reggae shared common roots in black America's R&B, blues, and early rock.)

In the pop-culture narrative, punk/reggae DJ and filmmaker Don Letts is credited with introducing generation zero of punks to reggae, as he was the DJ at The Roxy, the first punk club in London. Since few punk records existed in '76-'77, out of necessity (and his love of Jamaican music) Letts often spun roots reggae and dub in between the live punk sets--which had a great impact on the scene. However, punk icons Johnny Rotten, Joe Strummer, and Paul Simonon were already been huge reggae fans and Don Letts has stated in interviews that oftentimes Joe, Paul, and John would often turn him on to reggae records that he was completely unaware of.

But enough of our mini-history lesson and back to the matter at hand...

With the first track off their sweet new single, Black Market Sound System continue roots reggae's and punk's tradition of speaking out against injustice. "Heavy Lies the Crown" is a heartbreaking lament of living under the soul-grinding pressure of socio-economic oppression (and the violence that results): "They don't know/what we know/What we know/they don't know/What we've seen/they don't know." (The guest back up vocals by Jesse Wagner and Jeff Roffredo of The Aggrolites are particularly good and effective here.)

Heavy Lies The Crown by blackmarketsoundsystem

The flip side contains their testament to their love of reggae music: "Doctor, doctor, tell me what's wrong/I spend all day and night singing these songs/Reggae music--can you hear the sound/coming through the stereos in your hometown?/Feels so good/Feels so right/Reggae night!"

"Movin' On" is on optimistic song about cutting your losses (since "something's come between us") and being amenable to walking through a newly open door after another one closes: "Things get harder every day/So much fighting along the way/Too much pressure, that's why I say/That I'm moving on today." An inspiring song--that rocks out at the end!--to get you through these days of austerity and strife.

All in all, this is a terrific single filled with catchy tunes that should have a wide appeal amongst the ska, reggae, and punk audiences out there. Here's hoping there's more of this coming soon...

Here is part of the punk segment of the excellent 1995 PBS documentary "Rock & Roll: An Unruly History" by Hugh Thompson and Robert Palmer that delves into the connection between punk rock and reggae:

To view the entire punk segment of this documentary, go here.
Posted by Steve from Moon at 10:45 AM