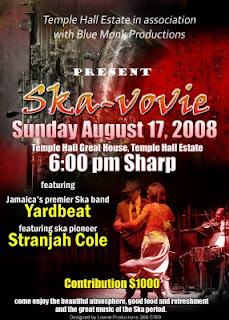 From the Associated Press:

KINGSTON, Jamaica (AP) — Johnny Moore, a trumpeter and founding member of the pioneering Jamaican ska and reggae band The Skatalites, died Saturday of cancer. He was 70.

Moore helped form the band in 1964 along with saxophonists Tommy McCook and Roland Alphonso and trombonist Don Drummond.

During the first 14 months the band was together, it transformed jazz, movie themes and other genres of music with ska style. It broke up in the 1960s but regrouped in New York two decades later. Two of their albums, "Hip Bop Ska" and "Greetings from Skamania," were nominated for Grammy awards in the 1990s.

Their music continued to influence bands such as 311, the Mighty Mighty Bosstones and No Doubt.

Moore lived in New York City for 14 years but returned to Jamaica in the early 1980s. He last toured abroad about eight years ago with reggae artist Bunny Wailer.

This sad news comes just a few days after I received an e-mail from (Dr.) Dan Neely (ex-Skavoovie and the Epitones guitarist, ethnomusicologist, and music archivist) that Johnny Moore was very ill and that a friend of his was organizing a benefit show in his honor in JA (see poster above)...

Obviously, Johnny and his fellow Skatalites had an extraordinary impact on thousands of ska and reggae musicians worldwide--and brought great pleasure to countless music fans everywhere. Thank you for sharing your gift with us.
Posted by Steve from Moon at 4:42 PM

Email ThisBlogThis!Share to TwitterShare to FacebookShare to Pinterest
Labels: Duff News, Skatalites, Skavoovie and the Epitones

Thanks for your comments Mr. Coozer. The NY Times ran Johnny Moore's obit today (I always like it when they recognize the achievements of folks who are pretty far outside the mainstream): http://www.nytimes.com/2008/08/20/arts/music/20moore1.html?_r=1&ref=obituaries&oref=slogin.

Also, here is the obit from the Jamaica Observer: http://www.jamaicaobserver.com/lifestyle/html/20080816t230000-0500_139162_obs_skatalites_trumpeter_dizzy_johnny_blows_his_final_breath_.asp.