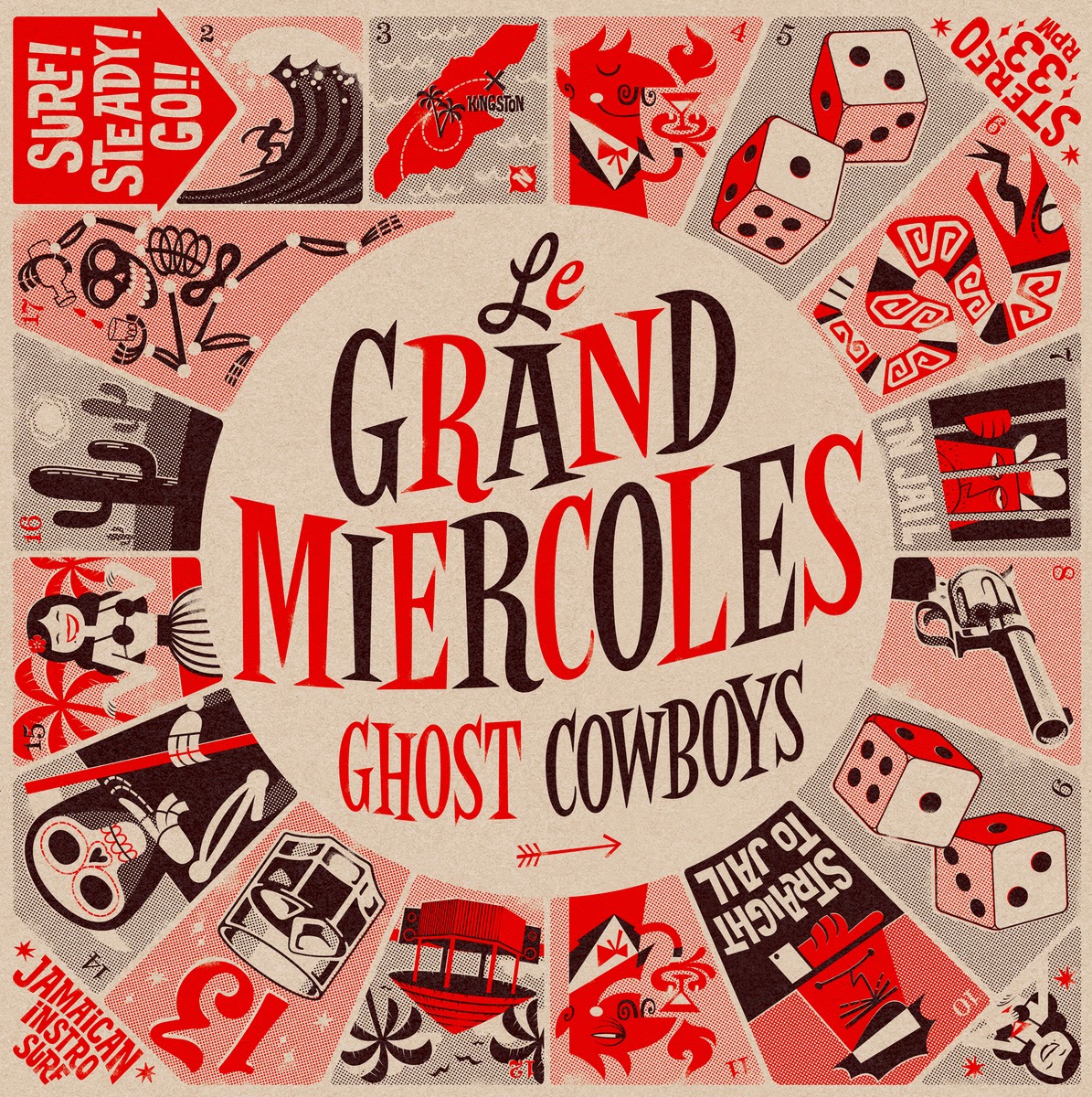 Named after a 1978 cult film by John Milius about a group of California surfers (played by Jan-Michael Vincent, William "Greatest American Hero" Katt, and Gary Busey) in the 1960s as they grapple with the onset of adulthood and the Vietnam War, Le Grand Miercoles ("Big Wednesday") are a Spanish ska supergroup (based in Valencia)-- comprised of members of the Malarians, Dr. Jau, Pataconas, The Offbeaters, and the Golden Singles band, amongst other groups--whose sound, they call it "surf-steady," is a wickedly good mix of Dick Dale-type twangy, Middle Eastern/Eastern European-inspired surf rock (see The Ventures, Link Wray, The Surfaris, The Chantays, and Duane Eddy), late 60s spaghetti Western reggae (see The Upsetters, Bad Manners' Return of the Ugly, and the awesome and essential Trojan compilation For a Few Dollars More: 28 Shots of Western Inspired Reggae), and vintage rocksteady and dub.

Ghost Cowboys is a brilliant instrumental album that features both choice covers and excellent original tracks, which, when given Le Grand Miercoles' surf-steady treatment, blend seamlessly together. The record kicks off with an awesomely dramatic and revved-up version of one of the great rocksteady classics, The Paragons' "Man Next Door" (written by John Holt about an extremely noisy and annoying neighbor), which is retitled here as "I've Got to Surf Away" (which is one way to get away and find some peace...). This is followed by several terrifically evocative songs by various members of Le Grand Miercoles: "Western Standard Time," the mournful "Fukushima" (remember the catastrophic nuclear reactor meltdown there?), and the magnificently cinematic "Cowboy Fantasma." Side one of the album concludes with a dubby version of The Clash's searing "Straight to Hell," which (particularly without the lyrics about American soldiers in Vietnam abandoning their Amerasian children and their mothers when their tour of duty was up--and how the US, for a time, turned its back on these--their sons' own--children) is transformed into a defiantly jaunty, even joyful, track here (this cover was also included on the fantastic 2013 ska/reggae tribute to The Clash from Golden Singles Records, The Clash Goes Jamaican). The spoken word bit towards the end of the song reminds everyone that they can "change anything they want to and that means everything in the world"--and that "people are out there doing bad things to each other, it's as if they've been dehumanized; it's terrible, we have to take the humanity back to the center of the ring and work with that for a time...without people, we're nothing."

Side two kicks off with a superbly edgy and muscular cover of Mel Torme's "Comin' Home Baby" (written by Ben Tucker and first recorded by the Dave Bailey Quintet in 1961; The Skatalites later covered and renamed it as "Christine Keeler"). Torme's version is pretty-bad ass (check it out!), but Le Grand Miercoles' is even more so! "Cecilia Ann" was written by Steve Hoffman and Charles Horton and recorded by Dave Myer and the Surftones in 1964 and much later covered by The Pixies on their Bossanova album. Le Grand Miercoles' take on it starts out with a quick and subtle quote of Henry Mancini's (via Duane Eddy) "Theme from Peter Gunn" and then slides into a sweet one-drop skank, with the lush guitar line washing over it. "Alligator Ye-Ye" is a frisky dance number that you might expect to hear in a campy 1960s beach party or sex farce film (ye-ye was a 1960s French/European style of innocent, yet knowing/sexy, pop). "Caravan Party" has great loping groove (and organ solo)--you can imagine all of the covered wagons making their way across the unforgiving landscape. If you were already familiar with Le Grand Miercoles' surf-steady style, then Chris Isaak's wounded and haunted 1989 hit "Wicked Game" (which became a hit via David Lynch's 1990 "Wild at Heart" film soundtrack) is right in their wheelhouse. The album finishes with "The Rumor," which has a beautiful melody, but also suggests the danger and deceit lurking beneath.

As one might surmise, Ghost Cowboys is essentially the imagined soundtrack for the defiant, but lonely and tightly-wound rebels who are compelled to follow their particular life's path, whether it be on surf board searching for the perfect wave (and girl!) or horseback evading the bad guys/the law through a bleak and hostile environment. And it makes for fantastic listening, even if you're destined for a more conventional existence. While Le Grand Miercoles' killer surf-steady style may not be for diehard ska purists (though they should expand their musical horizons), Ghost Cowboys is a stellar, smoking hot album (with outstanding cover artwork!) that should not be missed. It's certainly one of the best ska albums of 2014.

Superb review. This came in the mail last weekend and I immediately extracted it's companion CD & brought it on our family's road trip down NYS thruway! So great. If you like this style do check out Carlos Dingo - Ska is Dangerous on Megalith a few years back. For fans of!