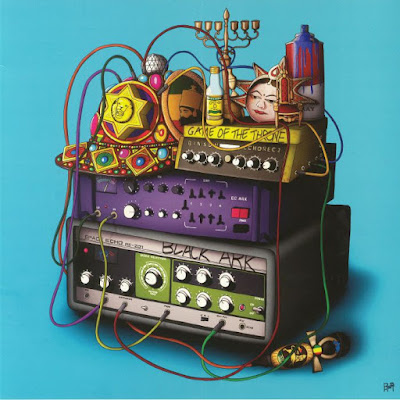 The three tracks on the Game of the Throne EP--which were licensed from Mad Professor's Ariwa label--appear to have originated from the same sessions that produced the recent Black Ark Classics in Dub album from Mad Professor and The Robotiks featuring Lee "Scratch" Perry. "This is the Upsetter" is a fairly straight-forward, but enjoyable dub version of Perry's 1968 rocksteady cut "The Upsetter"--his first release for Joe Gibbs' label after breaking with Studio One (and aimed at squarely at Clement "Coxsone" Dodd for not giving him enough credit and money for his productions for Dodd). More compelling are the dubs of the paranoid/grudge-filled "Evil Tongues" and fantastically left-field "Soul Fire" (both from Scratch's phenomenal 1978 Roast Fish Collie Weed and Corn Bread album), renamed here as "Lion's Share Dub" and "Game of the Throne." Surprisingly, "Lion's Share Dub" is devoid of spoken or sung commentary--no grievances aired here--but it's a terrific Black Ark-ish dub instrumental. The highlight of the EP is "Game of the Throne," which transforms this previously quirky (but awesome) track into one with a serious, danceable (!) groove that offers praises to Jah ("Lord of lords/King of kings/Word of words/God of gods") and invokes the sacrificial/cleansing religious aspects/connotations of fire with righteous Old Testament punishment ("God will be speedy/And burn all the greedy/And save the needy"). Perhaps not essential, but Perry obsessives will absolutely want this.