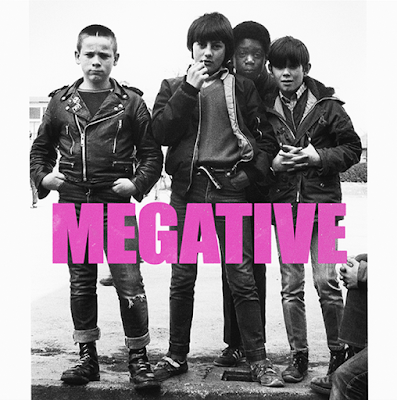 Megative's tremendously good and absolutely searing self-titled debut is a concept album of sorts, focused on the breakdown or end, really the death, of everything--your own body and consciousness; inter-personal relationships; society/civilization; the sum of humanity; and the very planet that sustains us. These bleak Armagideon Time anxieties are expressed within a sparse, but powerfully realized and incredibly appealing mix of modern minor-key ska and dubby reggae (think of a mash-up of The Specials' Ghost Town EP with the Gorillaz's Demon Days or 2 Tone and punky-reggae Clash tracks given a modern, juiced-up Danger Mouse/Prince Fatty/Mungo's Hi-Fi production).

The album is bookended by tracks that incorporate the ominous wail of air-raid sirens (which, depending on your age, may remind one of the heavy "Two Tribes"-like 1980's Cold War trepidation of perishing in a nuclear holocaust that everyone carried with them daily). The opener, "Have Mercy," begs forgiveness for our accumulated sins over the ages that we now must pay for in a major Old Testament way ("There's something strange coming over this land/It don't have a face, still stares you down/Maybe it's the bloody history coming back and seeking revenge"). While the eerie final track "One Day...All This Will Be Gone," with its horror/sci-fi B-movie spoken intro (from the made-for-TV post-nuclear war movie "In the Year 2889": "Maybe there's no one left to hear my voice, no living being to record the end of the world...Down through the ages, the prophets forewarned us that in one day thousands of years of accomplishments would be wiped away by the destructive hand of power. Now that day has come..."), is about personal, emotional, and global apocalypse--from the perspective that everything is fated/designed to be impermanent, transitory, fleeting and we can't do a damn thing about it ("I never thought I was a fool for love/Until you broke my heart/And now I wonder if the end was not/Built into the stars" and "But monoliths will never last forever/Pyramids decay and weather/We scramble for eternal life anyway/I lie awake staring up at the ceiling/See the cracks and the dark gray feeling/We run from fear/But all our schemes are in vain"). It also may be about the terror of dying alone.

The songs that fill the grooves between are equally filled with dread.

In the shadow of looming mortality, the singer realizes in "More Time" that there are more days behind him than ahead--and regrets that he hasn't spent his time better ("Oh, I never gave a fuck about the youth I wasted/Oh, thought I had more time/Now I only seem to dream about/The fruits I tasted/Oh, can I get more time?"). It's an eventual lament for everyone living, but you'll sing with that chorus wherever you are in life. Fast-forward 10-15 years or so from Terry Hall's "Friday Night/Saturday Morning" and you have the protagonist of the very catchy "Can't Do Drugs (Like I Used To)," whose body is wearing out, expressing worries about the decline to come: "I can't do drugs/Like I used to/'Cause I know too much/And I might blow a fuse...I used to think I would live forever/They said that I was crazy/But when I dream of the future now/I wake up.../The sweat is dripping off me" (Screechy Dan hammers it home: "I remember when you used to be wilding/Club after club every night until morning...Time after time/You did line after line/To get dime after dime/It's crime after crime..."). The complete lack of empathy and failure/inability to recognize people as they actually are is portrayed in "She's Not Real" (with its echoes of "Stereotype"): "What she is/Is not what he sees/She's a figment/He wants to believe/Desire unquestioned/His heart is deceived/He wants to make her/Into all that he needs..."


The post-apocalyptic spaghetti Western reggae-ish "Beneath the Sun" (which features a fantastic Rico-like trombone solo) depicts a not-too-distant future when planetary climate change of our own making (that we failed to mitigate or reverse!) has transformed Earth into an unrecognizable hellish landscape of nothing but desert and salty sea--and triggered the disintegration of society and decimation of humanity. Extreme economic inequality at its ugliest plays out in "Can't Get Away," as the wealthiest have the resources to escape "a world charred to a crisp," leaving the desperate masses behind with no option but to face oblivion: "Oh, we watch those lucky few/Fly off into the stars/Never to return, while we cried/"Gotta get away!/Oh, can't get away!" (Think it's far-fetched scenario? What about the tech billionaires today developing their own private rocket programs?)

The one joyful and truly blissed-out moment on the entire album comes in the "They Live" referencing "Yeah Yeah Yeah (Yeah Yeah)." The verses of the song are in a minor key (as is almost every song on the record)--"The maniacs are in control/Aliens in human bodies without souls/We watch them on our screens like they're gods/And we smile while they feed us to the dogs/Now I fear I might do something rash/Watching lunatics build towers doomed to crash/They divide us up against our friends/How I long for the days when we'll all sing again..."--but everything abruptly shifts to a bright major key during the you-can't-resist-singing-along chorus of solidarity and rebellion against oppression: "yeah, yeah, yeah (yeah, yeah)!" Judge Screechy condemns the oppressors to death by guillotine for "crimes against humanity"--even though the end times are already here as a "wave of blood with crush the Earth." At least, humanity will be free to stand on their feet when Doomsday arrives.

Megative--vocalist Tim Fletcher (The Stills), producer/bassist Gus Van Go (Me, Mom and Morgentaler), producer/mixer/songwriting tandem Likeminds, AKA Jesse Singer and Chris Soper, and dancehall veteran Screechy Dan (Ruff Entry Crew)--have created a brilliant, if not deeply dark and profoundly disturbing vision of what's lurking on our horizon. The question is if we'll heed the alarm to change what we can (and even enjoy ourselves!) before it's too late.