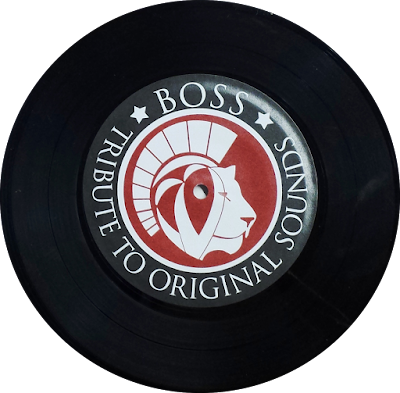 The latest Specialized four CD compilation assembled by Paul "Willo" Williams Boss: Tribute to the Original Sounds (to benefit the Teenage Cancer Trust, National Foundation for Youth Music, and Tonic Music for Mental Health) has yielded its quite good abridged vinyl version. This year's Specialized project is focused on honoring and covering 1960s Jamaican musicians and their songs, and the approach on this EP is split between traditional and more 2 Tone leaning sounds. In a weird, postmodern move, you have still-active originators Stranger Cole and Keith and Tex essentially paying tribute to themselves (as well as their peers). The Kingston All-Stars (a supergroup comprised of Sly Dunbar, Ansel Collins, Mikey Chung, Linford Brown, Jackie Jackson, Robbie Lyn, Everton and Everald Gayle--who, in various incarnations, have worked with Bob Marley’s Wailers Band, Studio One’s Sound Dimension and Soul Vendors, Lee Perry’s Upsetters, Peter Tosh’s Word Sound and Power Band, and Toots and the Maytals) back Stranger Cole on a great, moody original ska cut "Step Up" ("...in the light"). Chicago's Akasha support Keith and Tex on a faithful rendition of their indestructible and enduring 1967 take on The Spanishtonians' "Stop That Train." The Crombies (also from Chicago--Jump Up is located in the Windy City and the band's label, after all!) turn in a raucous and threatening version of Stranger Cole's 1963 rude boy anthem "Rough and Tough." First generation mod/musician Arthur Kay and his Clerks cover "Sea Cruise" (a rhythm and blues/proto-ska track written by Huey "Piano" Smith, but a hit for Frankie Ford in 1959; Jackie Edwards covered it in 1964; and, of course, Rico Rodriguez was backed by The Specials for his 1980 2 Tone single featuring this song) and their rendition is lively and completely winning. While nothing here is a radical, rule-breaking interpretation of a beloved ska or rocksteady classic, the performances are rock-solid and enjoyable--and it all goes toward some very worthy causes.

Read The Duff Guide to Ska review of the previous Specialized record Gifted, which was a ska tribute to The Jam.