Duff Guide to Ska Fast Takes: Barbicide "Fresh Cuts" and The Twilights* "Hear What I Say" 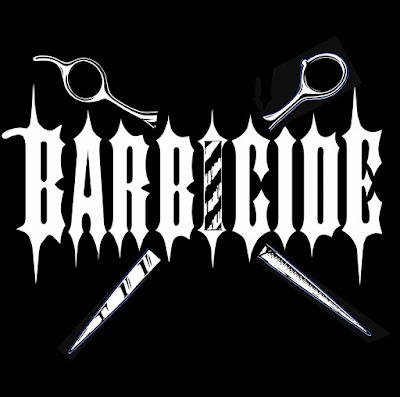 Editor's note: Back over the summer, I featured these bands (along with the mighty Beat Brigade) at my occasional Electric Avenue ska night at Characters in midtown Manhattan--and I'm a big fan of both acts.

Barbicide, for those of you who've never stepped foot in a traditional barber shop, is the blue disinfectant, fungicide, and virucide that barbers dip combs, scissors, and razors into to kill off fungi and all sorts of nasty viruses. But Barbicide is also the name of a fantastic, NYC-based, modern/third-wave ska band (featuring two former members of Mephiskapheles, Brendog Tween on guitar and vocals, Mikal Reich on drums, plus Jerica Rosenblum (Hard Times, Scofflaws, Defactos) on keys and vocals, and Irena Jaroszewska on bass and backing vox) that has just released their dynamite debut EP, Fresh Cuts (digital, Pass the Virgin Music, 2019). It wouldn't be too far afield to compare Barbicide's sound and vibe with the kind of ridiculously catchy songs Reich and Tween wrote for Meph's The DEMOn tape and God Bless Satan (think "Eskamoes" "Doomsday," and "Saba"), but this is by no means a retread--yes, their music is immediately accessible, but it's wonderfully unique and bent.

Fresh Cuts is an EP of protest songs--three of them essentially anti-love along with a more traditional anti-war track--from musicians experienced enough to have seen some dreams dashed and life mow them down a few times, but they're stubborn bastards; beaten up, battle-scarred, and all the wiser/wise ass/cynical for it (Gen Xers are, after all, at the helm here). The frenetically upbeat (check out those amazing "hey-hey-hey's"!) lead track "Unlove You" is about actively extracting oneself emotionally from a relationship gone bad ages ago ("Well, it's been a long time since you broke my heart/But it ain't been long since I cried/And it feels so good getting over you/Like Lazarus when he undied"); here, the opposite of to love is to unlove. This is followed by a film noir-ish portrayal of a not-exactly-healthy-for-you girlfriend with "Jezebel" (the second Biblical reference on the EP; she, of course, was the pagan, Baal or Satan/demon-worshipping, Christian-corrupting, sexually promiscuous temptress; you can take the musician out of the satanic ska band, but can't take the satanic ska out of the musician...), but at least the singer knows the deal: "Jezebel, you're my gallows/Jezebel, you're my femme fatale/You came from somewhere deep and dark/A creature from down below/Jezebel, you're my gal." "I Don't Remember" is the back and forth tale of a marriage gone south. The wife (Rosenblum) recounts the good and bad ("Do you recall we had ten kids/Ten piles of laundry all covered in skids/Do you recall all the money spent/Have a stack of bills, not one red cent"); while the husband (Tween) mostly doesn't have a memory of anything, but finally fesses up that he remembered that he "had it all" before he lost himself in booze. It's tragically funny and all-out brutal.

Barbicide's EP bows out with a brilliant, heartfelt cover of P.F. Sloan's "Eve of Destruction" (covered most famously by the likes of The Turtles and Barry McGuire), which is an apocalyptic, anti-war, anti-nuke, and anti-racist protest track from the 1960s that captures all of America's contradictions in a nutshell--and is still incredibly relevant today. Some of the lyrics are worth quoting here: "Think of all the hate there is in Red China/Then take a look around to Selma, Alabama/You may leave here for four days in space/But when you return, it's the same old place/The pounding of the drums, the pride and disgrace/You can bury your dead, but don't leave a trace/Hate your next-door neighbor, but don't forget to say grace/And you tell me over and over and over and over again, my friend/How you don't believe we're on the eve of destruction." (Even this song has cutting Biblical references about Christian hypocrisy: "You're old enough to kill, but not for voting/You don't believe in war, what's that gun you're toting?/And even the Jordan river has bodies floating...") Barbicide's Fresh Cuts is an immensely good EP--and highly recommended! 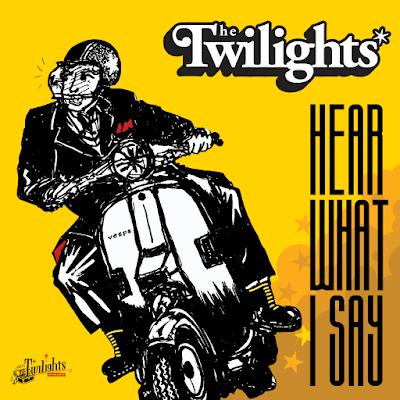 If you're craving the sweet, late-'60 sounds of rocksteady (with lots of echo effects rolled in), you'll find The Twilights*' Hear What I Say (CD/digital, self-released, 2018) most satisfying. This 10-track album features The Twilights' really splendid, sing-along original cuts standing tall and proud alongside their marvelous takes on several rocksteady and roots reggae classics--notably Delroy Wilson's evergreen "Dancing Mood," Ken Boothe's version of Edward Heyman and Victor Young's pop standard "When I Fall in Love" (and its wild dub version, "When I Fall in Dub"!), and The Heptones' "Hypocrite." (The band, from Easton, PA, is Danny Kru Schurtman on lead vocals and melodica, Scott DeDecker on keys, Rebecca Pagliarulo on guitar and vocals, Edmond Cho on bass, guitar, and vox, and David Best on drums.)

Most of The Twilights*' own material is concerned with one's psychological mood--particularly the desire to achieve some semblance of emotional equilibrium. The musically bright, sing-song-y "Rainy Day" (which features an unexpectedly fantastic, effects-filled bridge) has lyrics that express longing for an end to episodes of depression ("In sad times, I have prayed for rain...Hide in corners/To feel gray...For the last time, let me shine again/Brighter than your mighty sun...It's going to be a rainy day/'Cause this shit's gotta change!'). The opening chords of "Gold" quote Freddie McKay's "Picture on the Wall," but then shift to a brisk, almost jaunty riddim reflecting the determination of the chorus: "Gold is in my eyes/Stars are in my head/I push it, I push it/I push until I'm dead"; but then doubt and insecurity seep in during the verses: "Things are not the way I've always dreamed/Feel away, cast away at sea/Pushing hard, 'cause that's how I still believe/People made boring by machines...Waking thoughts, you're still in my dreams/Everything's exactly what it seems...Don't go, don't go/Hold me, hold tight!" I particularly like the claustrophobic and unsettling "Panic Attack" ("Panic attack, deception's over me/Panic attack, it's something, can't you see?/No one takes it seriously...") with its choice use of off-kilter toy piano here. The album is capped off with a fierce, live, dubby version of Lee Perry and Max Romeo's "Chase the Devil" (one of the greatest songs ever written) that is simply epic! Keep your eye on this band!