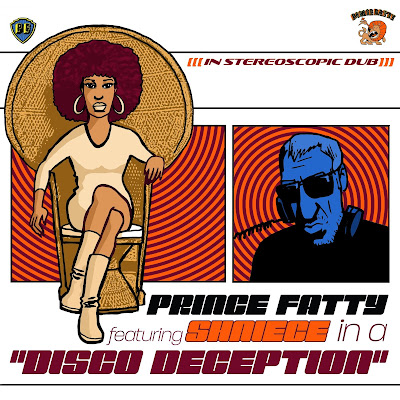 As of late, Prince Fatty has been mining his and his collaborators' shared love of soul music (for instance, see the awesome covers of The Temptations' "Get Ready" and William DeVaughn's "Be Thankful for What You've Got"). Of course, since black American musical forms like rhythm and blues, soul, gospel, and early rock 'n' roll significantly influenced the Jamaican musicians who created ska and its descendants (and there were a host of soulful rocksteady and reggae singers, like Alton Ellis, Ken Boothe, Delroy Wilson, Phyllis Dillon, Susan Cadogan, Marcia Griffiths, Jimmy Cliff, Toots Hibbert, and many more), it makes sense that many soul songs are ripe for being repurposed as reggae cuts (and there are numerous examples of such from the '60s onward). Rocksteady and reggae's slower tempos open up the space for soul singers to do their thing over tight, propulsive Jamaican grooves custom-made to pack dance floors--and the tracks on Disco Deception will do just that. For his latest release, Prince Fatty and singer Shniece Mcmenamin (of The Drizabone Soul Family, who's also worked with Chaka Kahn, Chic and Nile Rodgers, Sister Sledge, Aswad, Mungo's Hi-Fi, and The Last Poets) select some incredible tracks to cover: Lyn Collins' 1974 hit "Take Me Just as I Am," Gwen McCrae's 1974 single "90% of Me Is You," LaVern Baker's "Love Me Right" from 1957, "Fever"--first recorded by Little Willie John in 1953 who had a #1 hit with it, and Tina Turner's "You Got What You Wanted" from 1968. As always, all of the performances captured on Disco Deception are top-notch; Shniece's singing is never short of spectacular (and she makes it seem so effortless); and Fatty's production is impeccable. "Take Me Just as I Am" (with the great Horseman toasting), "90% of Me Is You," and "Love Me Right" are particularly wonderful and effective, though their stellar version of "You Got What You Wanted" ("...now you don't want what you got") has moments that will make the hair on the back of your neck stand on end. It's hard to match Turner's heart-wrenching performance (and, given her abusive relationship with Ike Turner at the time, horrifically true to life), but Shniece comes tantalizingly close.