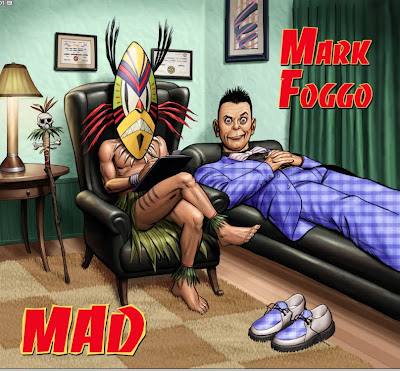 Mark Foggo is one of the few, wonderfully obstinate batch of musicians--alongside Bucket of The Toasters, Nick Welsh (King Hammond, Skaville UK, Bad Manners, Selecter), King Django, and others--who have been consistently producing high-quality ska since the post-2 Tone days of the mid-80s. Like many acts with origins in that era, Mark Foggo's ska sound has always been flexible enough to incorporate a wildly eclectic mix of influences--new wave, punk, 50s rock, and rockabilly--reminding one of the kind of offbeat acts that used to be featured on Stiff Records. (Come to think of it, Stiff acts Madness + The Untouchables + Ian Dury = Mark Foggo! Of course, he covered "Hit Me with Your Rhythm Stick" on his marvelous 1992 Couldn't Play Ska album.) No matter how you define or dissect his music, there is no doubt that he is an extraordinarily talented and versatile songwriter and musician.

Mark Foggo's eighth studio album, MAD, is stellar from start to finish--and crammed with instantly memorable, aggressively fast, minor-key tunes that create an unusual amount of claustrophobic tension for a ska record. His rhythm section is atomic-clock precise; the guitar and keyboard lines are gleefully frenetic; the horns deliver their goods like Muhammad Ali (landing their musical "blows" before your brain can process that they hit you); and his melodies are remarkably catchy. (The band seems to be always operating at maximum efficiency, so much so that you can practically hear the sweat dripping off the musicians.) All of this is topped off by the uninhibited, larger-than-life, and always entertaining antics of Mark Foggo himself.

The oftentimes surreal, comically absurd, and definitely twisted world of Mark Foggo is full of characters trying to make sense of senseless situations; survive in a system that, one way or another, appears to be dead-set on doing them in; or just flying their freak flags high and proud. MAD kicks off with "The Day I Met Muhammad Ali," written from the point of view of someone unwisely stepping into the ring to be pummeled (to death?) by Muhammad Ali in his prime ("With the help of rubber ropes/well, I'm running rings/I just hope if keep moving/he can hit other things/For sure, I've never seen anyone this tall/and I'm damn right certain I was never this small...") and uses one of Ali's signature taglines in the chorus. "Caravans" is a panoramic, Jam-like screed against RVs clogging up the roadways and gas stations in Europe ("See the snails with shells on their backs/running too fast with overloaded roof-racks"), while "Bang Me Head" is a terrifically upbeat tune about accepting that sometimes you just can't change the status quo ("Bang me head against an old brick wall, but it don't do nothing..."). "Rotten to the Core" is straight-on "Rumble in Brighton"-type rockabilly, delivering a warning to get out of town or suffer a beat down.

"Cybergirl" is about, well, um, looking at pictures of naked women on the web ("I could see her/She looked so good I could almost feel her!")--and its companion piece, "Sugarlover" has the singer on the prowl for "a girl with money/I'm looking round for a gal with looks." They're both done tongue-in-cheeky, but lust and greed motivate a good portion of the world's population, right? "Jump That Gate" is a loping reggae skank that in its verses has the singer pledging to amend his bad ways contrasting with the (Greek) chorus insisting that "nothing you can do can ever change any part of it."

The power-pop/new wave-ish "Watch the Clock" is a bitter clockwatcher's hymn: "I go to work and I waste my time/I pay my wages and they rob me blind." "Punch" is aggro-ska that demands "if he gets up again, then you've got to knock him down!" "Rollin' and Ridin" (a reference to the original slang for rock'n'roll, if you get my drift) incorporates a great turn-on-a-dime shift between minor-key verses and major key choruses (that feature an earthy, kick-ass Bill Haley/Chuck Berry sax riff). Mark Foggo does his best Johnny Rotten on "EU"--wondering where his "punk rock subsidy" is (apparently there is one for every other trade group), and the album is (sweetly) capped off with him trying to put into words how it feels when a lover is absent on the calypso-tinged "What It Feels Like" ("It's like when someone hits you low/It's like the music's running slow/It's like a secret you don't know/That's what it's like").

MAD is already on The Duff Guide to Ska's "Top Ten Ska Albums of 2010"--and is absolutely one of the best written, performed, and sounding ska records we've heard in a long, long time. Buy MAD now!

Duff Guide to Ska Grade: A+

[After this review was posted, one of The Duff Guide to Ska readers pointed out that five of the songs on MAD ("Sugarlover," "Rollin' and Riding," "Cybergirl," "Punch," and "Rotten to the Core") had previously appeared on the album "Skake the Baby" (2000) by one of Mark Foggo's side projects, The Babyshakers. The versions of these tracks included on MAD appear to be new recordings of these tracks.]

Check out The Duff Guide to Ska interview with Mark Foggo here.
Posted by Steve from Moon at 7:13 AM

It sounds like a lot of the same songs were on The Babyshakers record from 2000.

Is MAD a rerecording of these tunes or is this a kind of rerelease?

Thanks for bringing this to my attention. I don't have The Babyshakers' record and know nothing about it.

After searching around a bit on the web, I discovered that MAD shares 5 songs with "Shake the Baby" (Sugarlover, Rollin' and Riding, Cybergirl, Punch, Rotten to the Core). Having said that, it would appear that the MAD versions are new recordings--it sounds like one band recorded all the tracks and the production is consistent throughout.

I'll figure out a way to acknowledge this in the review...