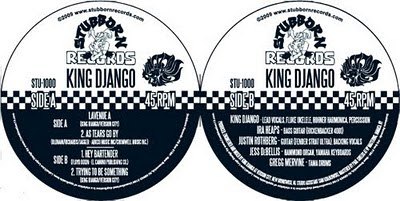 If you were to accuse any ska musician of having made a deal with the devil--his/her soul in exchange for the unflagging gift of ace songwriting and performing--King Django would certainly be on the short list. He's been on the ska scene since 1985--over a quarter of a century, yo!--and his four-track Avenue A EP is yet another superb entry in his already amazing and prodigious canon.

The title track is a breezily nostalgic ska tune that has Django pining for the early days of the NYC scene, when a major rude boy hangout--right near Blanche's bar--was the stretch of Avenue A ("black, white, and Asian skinheads out in the streets") at the edge of Alphabet City that ran alongside the then notorious drug market and homeless encampment known as Tompkins Square Park: "Prince Buster was blaring from the boombox on the roof of the car/Bob Marley, The Clash, The Jam, and The Specials/Only cross Avenue B just to cop some 'D'--that's "Downtown"/only enter the park if you had to pee/That's when it was really/Back when it was really/Back then it was really going down." It was kind of dirty and sometimes definitely dangerous--but the funky, pre-gentrification/Guiliani, anything-goes East Village of the 80s was inexpensive, diverse, and full of artists, musicians, and all kinds of freaks. It was the perfect place to spawn and nurture the ska subculture. The loss of this tight-knit scene, his youth, and a city that is no longer recognizable is palpable on the gorgeously bittersweet cover of The Rolling Stones' "As Tears Go By" (key lyric: "I sit and watch the children play/Doin' things I used to do/They think are new").

On the flip side, you'll find a spirited cover of Floyd Dixon's jump blues tune "Hey, Bartender" (you might also be familiar with Laurel Aitken's cover of this track from The Blue Beat Years album), which lightens the mood. "Trying to Be Something" has a mean, strutting reggae groove that matches the defiant tone of the lyrics ("I don't want to plot/and I don't want to scheme/and I don't want to plan/said I only want to dream/I don't want to calculate my every movement...")--Django "doesn't want to work that hard," as wisdom through experience tells him that he has to be who he is; there is no other choice. And for that, we should be very grateful.

Time to buy or bust out the turntable for this one, kids.

The Duff Guide to Ska Grade: A
Posted by Steve from Moon at 11:30 PM

a little late on this one steve...haha

and everyone reading this should listen to steve and buy it (from me at the stubborn merch table at the next VC Party) if you dont already own it.

also Django just put out a new CD, "Brooklyn Hangover." It's a live set from 2007 and its REALLY good.

Thanks, KJ. And yes, I'm pretty late in reviewing this (I had originally intended to write it up back in January, but my turntable broke and it took me time to buy another and then yadda, yadda, yadda, life got in the way, etc.). But, hey, all press is good, dude!

Of course all press is good press. I was only joking.

Speaking of Django, you should come out to the next VC party. It's gonna awesome.