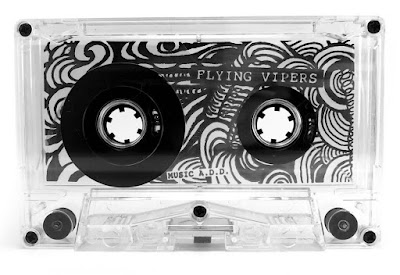 Editor's note: For Cassette Store Day 2017, Jump Up Records issued twelve cassettes (!) from acts like The Toasters, The Slackers, Mephiskapheles, Green Room Rockers, Roger Rivas, Danny Rebel (of Danny Rebel and the KGB), CeANNE (of The Mighty Fishers and Pannonia Ska Orchestra), Flying Vipers, The Drastics, as well as a Jump Up compilation titled "Pressure Hop" (a detailed list of Jump Up CSD releases can be found here). This is the last CSD-related interview we're posting this year...

Thanks to Marc Beaudette of Flying Vipers and Destroy Babylon for taking the time to answer our cassette-related questions!

The Duff Guide to Ska: "The Shadow Tape" is the third release on cassette from Flying Vipers--why did you decide to go with this format? Is dub music somehow better suited for tape than vinyl?

Marc Beaudette: "We started this project with a Tascam 8-track recorder and the intent to do as much as we could using only analog gear. The first two releases were tracked and mixed direct to cassette, so offering them on tape seemed appropriate.

For this new release, our producer Jay Champany used previous sessions, extending vocal versions and slowing down tape speeds to give the dubs a new vibe. If we could afford to put everything on vinyl, we would! Most music I think sounds best on wax, though the tape compression does sound great with certain genres like hip hop and hardcore punk."

DGTS: Are you a tape collector? Do you have a lot of dub and reggae on cassette (if so, which are your faves)?

MB: "My brother and I still have a few dozen tapes from our youth, and we both still collect. There are more punk and rock albums than anything else, but there's a good stack of reggae in the mix. Black Uhuru's Red is one that got played on repeat in my car, plus a handful from the Hearbeat label and ROIR. HR's Charge is another one that I played a lot along with his other SST releases."

DGTS: Did you grow up listening to music on cassettes?

MB: "For sure. Before we could even buy our own music, we'd get cassettes and blank tapes for birthdays and Christmas. We were really into making our own mixtapes; listening to the radio for hours, waiting for our favorite songs to come on and hitting record as fast as we could. Even when CDs were gaining popularity, I still rocked my yellow Walkman and wore out early Green Day and Weezer tapes riding the bus."


DGTS: At the moment, a lot of people see this format as a bit of an oddity. Something collectable perhaps, but not a truly viable way to listen to music, given the relative scarcity of cassette players in people's homes, cars, etc. Should bands and indie labels make a more concerted effort to make more releases available on cassette to drive a resurgence of this format? (They are an inexpensive way to release music in a tangible format...)

MB: "It's certainly an affordable way to get something physical out there, but it will most likely remain a very limited audience. Vinyl and CD are also niche markets, so for me it comes down to personal preference. It's difficult to sell digital albums in 2017, now that most listeners pay monthly to stream or just use YouTube/Bandcamp. If a run of cassettes helps album sales, I'd encourage indie bands and labels to look into it. That said, I also think the type of album plays a role. The new Destroy Babylon record we dropped this summer is very high fidelity, and didn't seem to warrant a cassette release (we opted for vinyl and CDs). The lo-fi dub sessions make total sense for tape."

DGTS: Flying Vipers are playing with Lee "Scratch" Perry soon--do you think he still listens to tapes (I assume you'll pass him some of yours...)?

MB: "I could imagine Scratch traveling the world with a bedazzled Walkman and a few choice cassettes. But then again, maybe he just has an iPhone 8."

Read The Duff Guide to Ska reviews of Flying Vipers' previous cassette releases, The Copper Tape and The Green Tape.