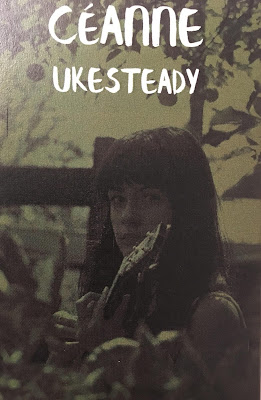 Editor's note: For the third straight year in a row, Jump Up Records is participating in Cassette Store Day--which is this coming Saturday, October 14, 2017. Jump Up is issuing twelve cassettes (!) from acts like The Toasters, The Slackers, Mephiskapheles, Green Room Rockers, Roger Rivas, Danny Rebel, CeANNE (of The Mighty Fishers and Pannonia Ska Orchestra--interviewed here), Flying Vipers, The Drastics, as well as a Jump Up compilation titled "Pressure Hop" (a detailed list of Jump Up CSD releases can be found here).

Much thanks to CeANNE for agreeing to do this interview so quickly--and for conducting it in English!

The Duff Guide to Ska: Is the title of your "Ukesteady" cassette release a nod to Chris Murray's somewhat similar lo-fi/acoustic "Rocksteady" album?

CeANNE: "Well, absolutely not. I had a rocksteady band here in Hungary called The Mighty Fishers. And I love the genre, I love ukulele. So, it's a mixture of things I love and I wanted to show my admiration for--ukulele and rocksteady. But you made me curious, I will definitely listen to it!

DGTS: What inspired you to record all of these songs only using a ukulele for accompaniment?

CeANNE: "I have always sung, but never played an instrument properly. I always thought,  'that's not for me, I am an amateur, I can never handle it.' It has turned since I found the ukulele--it made me change my thinking about playing music itself. Because it has so much power, though it's little--and has so many secrets, though it seems very simple. What I mean is that it was the first intrument which made me feel quick success while I played it, which made me feel like playing and playing and practicing on it. And I want to be a better and better ukulele player. Last year, I also bought a guitar, which I never thought I could be good at. I am not, but I don't care, I play it. It's all about self-esteem and consciousness, and being daring. Instuments make you a better singer and songwriter. And I can thank the ukulele for all of this. So, I thought it deserves a whole album. Maybe others will realize as well how great the ukulele is."

DGTS: Did you always plan for this set of songs to be released on cassette--and how did Chuck Wren and Jump Up Records come to release it?

CeANNE: "Not in my dreams! Ha ha! I had an LP with my former band The Mighty Fishers titled Soul Garden, which Jump Up Records in Chicago distributed. Then I started to spread my short ukulele videos on Instagram. Chuck saw them and we linked. He asked me if I felt like making a whole album of acoustic ukulele reggae/rocksteady songs on casette. I was very surprised and happy at the same time."

DGTS: How popular are cassettes in Hungary? Is a lot of music--particularly ska and reggae--released in this format in your country?

CeANNE: "Unfortunately, I have to say no. We are a little country, so subcultures are really "sub" and weak. There are some reggae and ska bands--great ones I would say--but I think cassettes vanished in the early 2000s. But when I announced that my new material will be released only on cassette, my audience was surprised, but in a very good way. It's a curiosity."

CeANNE: "Because I have some very good memories with them. I am of the young generation who started with cassettes, continued with CDs, then digital releases--and now are turning back to vinyl. I had my copied Spice Girls cassettes, I also had Destiny's Child, and many more, ha ha! I asked for cassettes for every birthday and Christmas. I stole my father's rock cassettes. I also did a cassette with children's songs for my grandmather as a birthday gift. I liked the Walkman times--it's my childhood and now we bring them back. It's more than cool. It's coolsteady ha ha!"

DGTS: If there's a question that I didn't ask here, but that you'd like to answer, please go ahead and include it.

Any idea if this is going to be released on another format? I dig her song on the Pressure Hop comp, but I'm not going to buy a cassette. (Sorry Chuck, but no. Just no.)

What part of cassette-only album was unclear :) it comes with a download that's a letter pressed card