Skavoovie and the Epitones To Release 20th Anniversary Edition of "Ripe"! 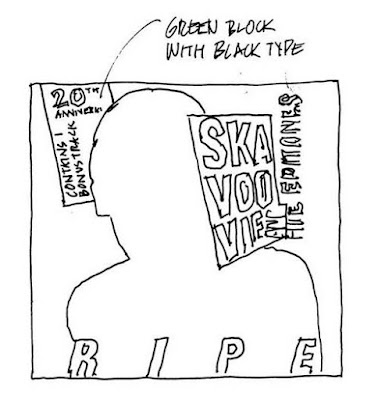 Word has it that beloved '90s ska ensemble Skavoovie and the Epitones will be re-issuing their fantastic second album Ripe with unreleased bonus material. This album featured stellar tracks like "Blood Red Sky," "Japanese Robot," (Jimmy Liggins') "Drunk," (Duke Ellington's) "Bli-Bip," "Latvian Lullaby," "Riverboat," and many more. The album was originally issued on CD by Moon Ska and Moon Ska Europe in 1997; and in a slightly expanded form by its sister label Moon Ska Japan as Super Ripe (which included several tracks from their 1995 debut, Fat Footin'). A vinyl LP was issued a year later on Germany's Grover/V.O.R.

The image to the right appeared on Skavoovie and the Epitones' Facebook page yesterday--which highlights the fact that this will be a 20th anniversary edition of the album. It's hard to believe that it's been that long since this first came out...