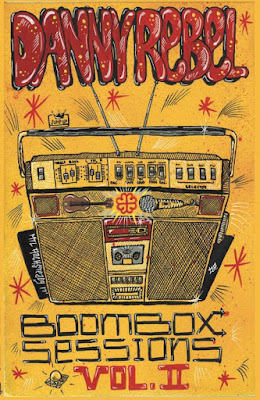 Editor's note: For the third straight year in a row, Jump Up Records is participating in Cassette Store Day--which is today, Saturday, October 14, 2017. Jump Up is issuing twelve cassettes (!) from acts like The Toasters, The Slackers, Mephiskapheles, Green Room Rockers, Roger Rivas, Danny Rebel (of Danny Rebel and the KGB), CeANNE (of The Mighty Fishers and Pannonia Ska Orchestra), Flying Vipers, The Drastics, as well as a Jump Up compilation titled "Pressure Hop" (a detailed list of Jump Up CSD releases can be found here).

Thanks to Danny Rebel for taking the time to do this interview so quickly!

The Duff Guide to Ska: This is your second cassette-only release of acoustic ska and reggae songs that were recorded on your boombox. What inspired you to do this and what has been the reaction from your fans?

Danny Rebel: "Listening to old acoustic Bob Marley and Dennis Brown recordings. As far as recording it on a boombox, most artists of today concentrate too much on the sound and not so much on the music itself. I wanted to show everyone that you can make music without going through the machine, like Autotune and this and that. I think doing it through the box makes it sound more gritty, interesting, and punk rock. Fuck the rules! A good example is Daniel Johnston's Hi How Are You, that album was recorded on a cassette player and the sound quality is not so great, but the song writing is fucking amazing. I also want to big up the great Chris Murray for 'nuff inspiration!"

DGTS: Did you grow up listening to your favorite music on cassettes or are you a more recent convert to this format?

DR: "When I was younger, my dad hooked up our TV to his boombox to have a better sound. And everytime a music video would come up, I'd hit the play and record button. That's how I made my mixtapes back then, along with songs I heard on the radio. I used to bike around town with my huge yellow sports Walkman, you know which one I'm talking about."

DR: "I'm actually seeing more and more local bands coming up with tapes. They're coming back!"

DGTS: Do you collect tapes from your favorite musicians--and, if so, which ones are some of your most treasured?

DR: "I consider myself a music nerd. So, yes I do have a tape collection. From hip-hop to reggae to jazz to punk! I'd have to say Yellowman's One in a Million, Half Pint's In Fine Style, and Rancid's classic Let's Go.

DGTS: If you could have any boombox ever made, is there a particular model you'd want?