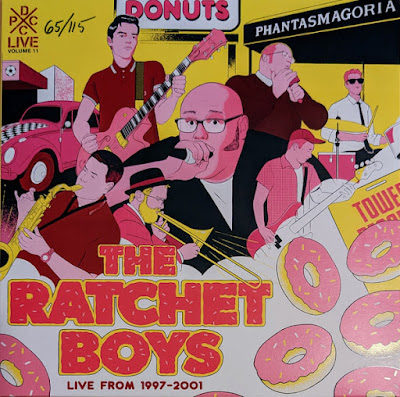 (Review by Steve Shafer)
If you were still paying attention to ska in the early 2000s (after the '90s scene crashed and burned), you were probably aware of Michelle Chin's terrific DCska.com website, which was a reliable online source of news and reviews after the majority of ska zines faded away (here's an archived page from 2001). Depending on whether you were in the greater metro DC area (the DMV--DC, Maryland, and Virginia), you also might know that Chin and her boyfriend Dan Hess, singer for The Rachet Boys, promoted ska shows in the late '90s and early '00s through Rude in DC Productions--and more recently via BlueBeat DC. (For a phenomenal history of the DC ska scene in the '90s/'00s, see the article "Skank and File: An Oral History of D.C. Ska," published by the Washington City Paper in 2013.)
Joining a stellar collection of peers--The Pietasters, Checkered Cabs, Eastern Standard Time, and The Skunks--The Rachet Boys became one of the more dominant ska bands on the late '90s/early '00s DMV ska and punk scene. For several years, they also fueled a number of massively popular shows (booked by Chin and Hess) at an indoor soccerplex in Gaithersburg, MD called The Corner Kick. Just as the DMV scene began winding down around 2006, Hess was diagnosed with Hodgkins Lymphoma, and tragically passed away in 2007 at age 30.

A digital collection of The Rachet Boys' live recordings was released in 2019 by BOB Records. For fans preferring vinyl, DCxPC Live recently reissued this set as The Rachet Boys Live from 1997-2001 LP, with all money from sales (though not shipping) donated to the Leukemia and Lymphoma Society in Hess' memory. As one might expect, some of these recordings are more rough than ready, but they capture the undeniably winning live power of the band, Hess' charisma and humor (though not the donuts he used to toss to the crowd), and a whole lot of stage banter and crowd noise. The Ratchet Boys' sound falls in The Scofflaws/Skavoovie & The Epitones' modern (and slightly twisted) trad ska category (though they occasionally veer into punky ska). While this set contains two covers (Madness/Prince Buster's evergreen "One Step Beyond" and Symarip's "Skinhead Moonstomp), it spotlights The Rachet Boys' trove of excellent originals like "Montoya," "Farragut North" (a DC Metro station), "Shipwrecked," "Gator Bait," and "Brave New World" (paging Aldous Huxley!), as well as sillier but crowd-pleasing fare like "Blue Balls" (hey, the band originally was named The Skanker Sores).

This album is likely a must-buy for anyone who was part of the DMV ska scene and a fan of Dan Hess and The Rachet Boys (you can vicariously re-live those glory days!). But it'll also be of interest to '90s ska fans in general, who will be transported back in time on hearing these peculiar Third Wave ska sounds again.