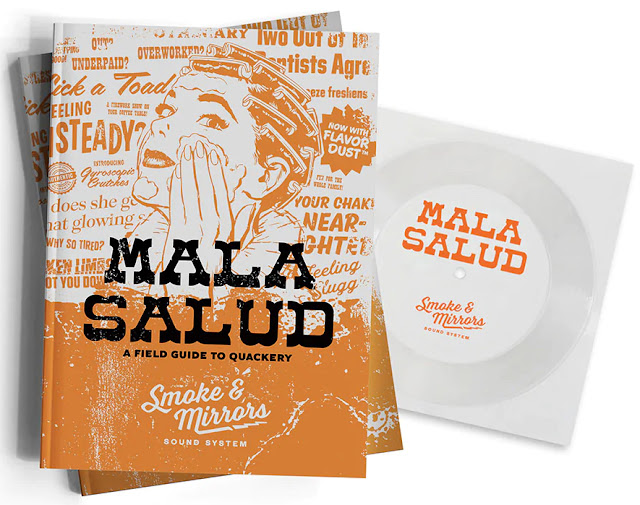 For much of our nation's history, Americans have been deluged with hearsay, humbuggery, and bunco. It's all a malignant but necessary component of our hyper-capitalist society where accumulating wealth and power means everything (it's the American dream!). Duping regular folks to win their cash, vote, and/or blind acquiescence to achieve all this is a feature of capitalism, not a bug.

One area that always has been ripe for exploitation is non-prescribed medicines (aka over-the-counter medication). These "patent medicines" originally were proprietary medications granted patents by the British royal family in the late 17th century--some of which were exported to the American colonies. By the mid-1800s, there was a thriving domestic patent medicine industry in the US, though most of these products never received government (or royal!) patents and were unregulated. Their "cures" for every ailment under the sun often involved alcohol, morphine, opium, or cocaine.

The peddlers of these fake cures eventually came to be known as "snake oil salesmen." The genesis for this phrase traces back to the mid-1800s when 180,000+ Chinese workers immigrated to the US (as indentured laborers) to build the Transcontinental Railroad. One of the traditional medicines they brought to the US was snake oil (derived from the Chinese water snake), which contains fairly high concentrations of omega-3 fatty acids that reduce inflammation and can treat arthritis. Word of the effectiveness of snake oil spread among the American railroad workers. Eventually, some decided to make and market a domestic version of snake oil made from rattlesnakes (which Choctaws and other Native American tribes used for sore joints, though the amount of omega-3 fatty acids in rattlesnakes is far less than in Chinese water snakes).

To help sell their products, these entrepreneurs put on traveling "medicine shows" (paging Mick Jones and co.!), which provided carnival-like entertainment as well as dramatic demonstrations of how their snake oils were made (using live rattlers) and their effectiveness (using shills in the audience who would be "cured" of a host of ills before the audience in real-time). By the early 1900s, the US federal government began to regulate food and drug manufacturers and discovered that Stanley's Snake Oil Liniment (which dominated this market) contained no snake oil at all (Stanley was fined and did not dispute the charges). Of course, this type of quackery didn't end there.

Inspired (and horrified) by the pernicious disinformation insanity of the last several years that is turbo-fueled by social media's hate/bullshit-pushing algorithms (ivermectin and chloroquine phosphate, anyone?), Smoke & Mirrors Sound System's whip-smart book Mala Salud: A Field Guide to Quackery offers dozens upon dozens of hilarious 1950s/1960s-styled ads for ludicrous medical cures and patently absurd products. (They remind me of the tempting but too-good-to-be-true ads in the back of the Spiderman comics I read in the early '70s, like the one that promised a seven-foot Polaris nuclear sub with missiles, periscope, and electrical panels you could sit/play in for seven bucks.) The illustrations by Michael Buchmiller and ad copy by Buchmiller and John and Andrea Roy are spot-on ("Don't let little Jeffrey fall behind in class. Brighten his day with Liquid Sunshine for kids! Stimulates faculties! Increases manly courage!"). Make sure to read Buchmiller's intro on page 3, as well as the copyright/disclaimer page. Both appropriately orient you for digesting this book.

I'll let Buchmiller and the Roys have the last word: "For more information about Smoke & Mirrors Sound System, use the internet or ask your cool friend."