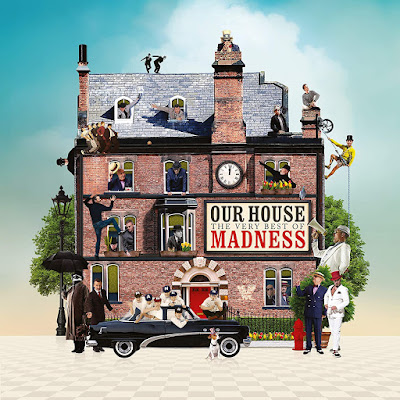 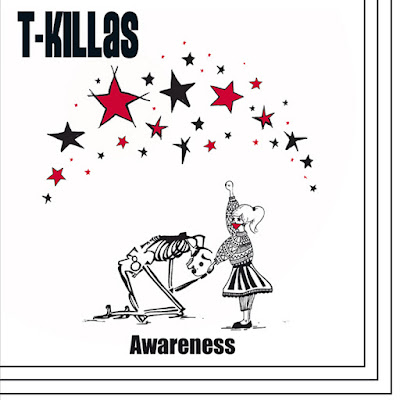 As my friends at Stateside Madness recently pointed out, even though there have been loads of Madness compilations released in the UK over the years, only four have been issued in the USA--and none of them have included tracks past 1986! So, the release of the twelve song Our House: The Very Best of Madness (CD/LP, Union Square Music, 2021) is more than overdue and will help the casual Yankee Madness fan catch up on what they've been missing as of late. There are cuts from 2009's outstanding The Liberty of Norton Folgate (read my review of the album and film) and 2016's Can't Touch Us Now (read my review of it here)--wot, nothing from 2012's Oui Oui, Si Si, Ja Ja, Da Da?--plus the 2019 digital single "Bullingdon Boys" (read my review here), which has never previously received a physical release! Even though I have all of their albums, I'll sheepishly admit that I picked up this comp just to have "Bullingdon Boys." Such is the life of an obsessive vinyl collector. (Also make sure to check out Stateside Madness' brilliant interview with Madness guitarist Chris Foreman!)

I'm not exactly sure why Germans have such a knack for making really great ska. But if you like The Busters, No Sports, The Frits, The Butlers, El Bosso und Die Ping Pongs, Bleichreiz, Skaos, The Braces, Dr. Ring Ding, The Senior Allstars, Bluekilla, Masons Arms, Yellow Cap, etc. as much as I do, make sure to add T-Killas to the list. Their incredible new album Awareness (CD/LP, Fire and Flames Music/Grover Records, 2020; and available in the USA through Jump Up Records) is a mash up of melodic 2 Tone/early '90s Krautska (particularly The Busters/No Sports/The Frits), and The Clash, The Jam, and The Adjusters (and note that those last three bands were fiercely leftist). In the midst of seemingly everyday songs about going out and having fun, pursing women or men, and just trying to earn enough to get by in life, T-Killas pointedly include messages that are anti-fascist, and pro-socialist and gender equity. Ska fans longing for new protest songs to address some of the many injustices and evils out there have another album for their arsenal!

In what is clearly the single of the album (that I first heard through the Do the Dog Ska-A-Go-Go, Volume 3 comp), the irresistible knees-up singalong "Dandy and Rude" gleefully trades in bad-ass myth-making while celebrating rudies/workers' unity and purpose:

He's so dandy and rude--you will never get this fool!

'Cause tonight I'm out with the most special one
When she starts to rumble, the jungle is gone
She drinks the enemy's blood out of her red bowl
Who says you got to be tall to kick the shit out of an asshole?

"Rudie's Struggle" challenges gender stereotypes--particularly rude boy/skinhead machismo: "'She's so soft and she's so sweet'/You think she's not a street warrior, oh please...He or she/Poor categories/Do you want to preserve the classic roles?/Or a counterculture without sexual harm for all?" Maybe a little is lost in translation, but you get the gist. "Gonna Go" is a sweet reggae love song about that special someone you can always rely on. "Riot Ground" sounds like a Billy Bragg/Joe Strummer punk rock collaboration sending up a flare to the powers that be to take note that not all is hunky dory with the masses: "You give 'em hope, you give 'em peace, education and disease/But is going on--if there's a fucking wake up call?" And perhaps the most powerful track on the album is the anti-capitalist/pro-socialist and shout out of solidarity with the workers of the world mod cut "Calling for Stars":

As someone living in a country plagued by white supremacy and enormous income inequality--and where far too many people fear and don't understand--and don't care to understand--what socialism and antifa actually mean, it's both striking and heartening to hear catchy, positive songs about both. We really need them, so keep 'em coming!