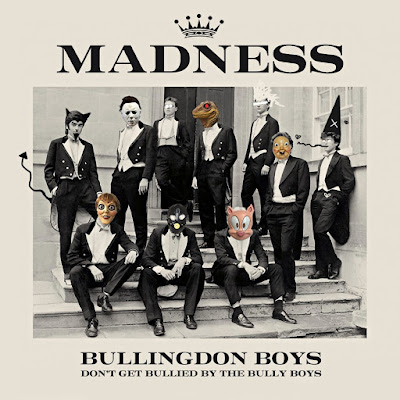 After a three-year break from recording (their last album was the excellent Can't Touch Us Now--though they have been playing gigs/festivals and have just released a book, "Before We Was We: Madness by Madness"), Madness are back on the beat with the explicitly anti-Boris Johnson/Tory/Trump track, "The Bullingdon Boys," just in time for the UK's high-stakes general election coming up later this month. For non-Brits, the Bullingdon reference is to an elite/exclusive club for rich Oxford University students (one not officially recognized by that institution) who have been educated at "public" (meaning private in the US) schools, such as Eton. Members of the Bullingdon Club include the former British Prime Minister David Cameron, former Chancellor of the Exchequer George Osborne, the Minister of State for Northern Ireland Nick Hurd, and the current PM Boris Johnson (Tories/Conservatives, all). And this song's about how the 1% (see the aforementioned Eton alum) maintain their cold, dead grip on political power and wealth through a rigged system of predatory capitalism/governance that benefits them at the expense of everyone else (in a similar vein--times never change--see The Jam's "Eton Rifles": "What chance have you got against a tie and a crest?").

In "The Bullingdon Boys" lyrics below, note the MAGA reference and Johnson's similar, Trumpian ploy of appealing to the anti-immigrant/racist crowd in order to lure them into voting against their own interests (buh-bye NHS) for the party that will gladly pick their bones after they've fleeced the nation.

"The Eton Boys are undefiled
The Bullingdon Boys, running wild
And England slides into the mist
No hope they'll cease nor desist

"The Bullingdon Boys" opens with the discordant, careening car crash final crescendo of sounds (an orchestral glissando) from Lennon and McCartney's/The Beatles' "A Day in the Life," (in the "Bullingdon" music video, it looks like we're about to crash into the cliffs of Dover) and transitions quickly into Madness' classic music hall-pop-ska sound, with Suggs serving as our reliable (if bitter) guide through the nation's "comedy horror show." The music video for "The Bullingdon Boys" features clips from movies like "A Clockwork Orange," "A Christmas Carol" (highlighting the pre-reformed Scrooge, of course), "Master and Commander: The Far Side of the World," "Bonnie and Clyde," one of the spaghetti Westerns (don't have time to watch them now), and the disturbing satire of English public school life (also starring droog Malcolm McDowell), "...if," among others.

At the moment, there is no physical release of this song--it's a digital single, available from the usual outlets. But a protest track like this--so sharply relevant to what may be democracy's end times--cries out for a physical release (that artwork's made to be on the picture sleeve for a 45!) to race up the charts and give notice/pause to the powers that be (and hope to the resistors) that not everyone's been duped by their authoritarian gaslighting or co-opted via their insidious, bread and circuses-like schemes.

And they're finally returning to NYC... Manhattan Center on 22 May, tickets going on sale at 10am today. Reason to live!