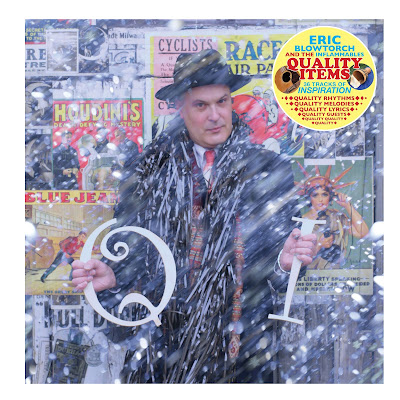 Quality Items, the excellent new triple-LP (containing 36 songs!) from Eric Blowtorch and the Inflammables (3 x vinyl LPs, Bopaganda! Records, 2021--you can buy it through their Discogs page), brings to mind The Clash's Sandinista (also 36 tracks), not just for the album's length, but for the band's versatility and daring--they're going wherever their creativity and inspiration leads them. Like The Clash, Eric Blowtorch and the Inflammables don't limit themselves to any particular musical genre. There's some really fantastic ska and reggae here, but also a few mix tapes' worth of top-shelf jazz (big band/free form/no wave), soul, bossa nova, pop and rock, even disco (the musically omnivorous Joe Strummer would've been proud). Duff Guide readers will be most interested in the ska tracks "Bad Dream" ("...and you feel so lonely, lonely, alone/Like Margarita with one limp hand stuck inside the trombone/Bad dream...today was just a bad dream/This terror must subside/You'll feel better after you have cried"), a version of Leonard Cohen's cinematic and vengeful "First We Take Manhattan" ("...then we take Berlin"), and a different, stripped down take of "Mercy" (which was released as a digital single last year and reviewed by me here), and the reggae cuts "Hatred of Captivity" (a spectacular "Ghost Town"-y instrumental), a wonderfully ragged cover of Marley's "Dance Do The Reggae," and the jazz-inflected "Last Day of School." But less parochial music fans also will find much to devour, including the big band "She's a Pro"; the no wave/free form jazz songs "Set My Woman Free" and "Paz Para Vieques"; the Motown-ish "You Ain't Mad" and "Town for Sale"; the harrowing, defiant, and hopeful WWII/Holocaust (and Peter Ivers-sounding) ballad "Ghetto Resistance"; and the offbeat pop and rock cuts "Best of Times" ("Please pardon the expression/But we've all known great depression/Stop, look, and listen, pity party's out of session--not waiting for your blessing!/These could be...the best of times"), "Guzzling Gasoline" ("The first foot on the pedal seldom touches earth/Millionth customer at Citgo knows what life is worth/'This bucket is my birthright!' cries the bully in the pulpit/Give me the premium, let me gulp it!"), "Every Star in the Sky" (an end-of-the night-slow-dancer), "Never Too Far Away," and "Throw Open Your Arms." There's a lot to digest here (I've only scratched the surface), but like Sandinista, the longer you live with it, the more you discover, and deeper you find your love for it.
(For a bit more background on Quality Items, check out this interview with Eric Blowtorch in Shepherd Express.) 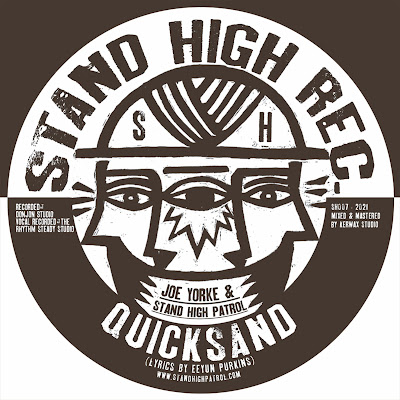 The incredible new single Malé Vol​.​1: Oscuridad (7" vinyl picture sleeve single/digital, Canana Records, 2021; found in the US via Jump Up Records) from Colombia's David Usma & The Siderens is part of a trilogy of releases exploring Usma's process of "healing his wounds" through music (Malé is a woman's name, so draw your own conclusions as to what this is all about). He's accomplished this by composing and recording three sets of songs that essentially go through a compressed version of the stages of grief: Darkness, Catharsis, and Rebirth. The first stage Malé Vol​.​1: Oscuridad (Darkness) features two killer skinhead reggae instrumentals: "Hell Moon" sports an otherworldly ice rink organ carrying a melody that's both beautiful and slightly unsettling, while the sprightly "Darkness" has dubby sections and majestic bursts of brass. I'm sorry for Usma's suffering, but he's making some great music while he's in the process of working it all out.

Joe Yorke & Stand High Patrol's magnificent and haunting new single "Quicksand" b/w "Quicksand Dub" (7" vinyl single/digital, Stand High Records, 2021) is about hidden, lonely suffering and bravely trying to bottle up all the feelings instead of embracing and releasing them (and reminds me of the awful time I had adjusting to boarding school life as a desperately homesick 11 year-old). With an understated but effective rocksteady riddim written by Stand High Patrol's Pupajim (the dub is by SHP's MacGyver) and lyrics by Yorke's frequent collaborator/producer Eeyun Purkins (of The Co-operators--read my review of their latest album Beating the Doldrums here), Yorke's incredible falsetto is brimming with empathy as he sings:
Hey brother, I hope you're doing fine
I know you've been having such a rough old time
When the door is closed and the monsters creep in
You're in the quicksand, feels like you're sinking

Back at school they taught you “boys don’t cry”
The tide is up inside, but no tears fall from your eyes
Brother you know that being big and tough
Means letting the tears flow when times get rough
Rough and tough

It's good advice for everyone to heed (delivered within a terrific song). Highly recommended.