Jump Up Releases The Toasters' "Dub 56" on Vinyl! 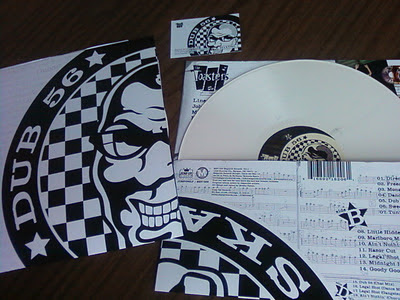 Toasters' fans and ska vinyl freaks should take note that the band's stellar 1994 album Dub 56 has been re-issued on wax for the first time by Jump Up Records. (The demand for vinyl in the US was at its nadir in the early 90s, so it was never released in this format, here or abroad.)

At the time of its release, the US ska scene had really begun to heat up--in no small part due to the 1993 national Skavoovee Tour with The Skatalites, Selecter, Special Beat, and The Toasters that provided a slew of opening slots for local ska bands and really helped galvanize the ska scene--and Dub 56 showcased the band at their best, with now-classic tracks like "Mona," "Legal Shot," "Dub 56," "Direction," "Ain't Nuthin'" and many more. Dub 56 became an instant fan-favorite, received raves from critics (see here, here, and here), and went on to be one of Moon Records' best-selling records ever.

This LP is available from Jump Up Records in clear or white vinyl for $12 and includes a digital download card for the entire album in digital form, plus four bonus tracks not on the LP: "Dub 56 (Chat Mix)," "Legal Shot (Dance Mix)," "Legal Shot (Gangster Mix)" and "Ain’t Nuthin’ (Chorus Mix)."

Where did the title of the album and song come from? It was the license plate number on Bucket's dad's motorcycle (you can make it out on the original artwork)--and the song is about (momentarily) leaving all of your problems behind by taking a fun spin on the motorbike...

It should be noted that in 1995, Stubborn Records released a 7" single of "Dub 56" with the album version on one side and "Dub 56 Chat" on the other (the last copy of which is for sale at Stubborn for $100). Also, the CD was licensed to sister labels in the UK (Dojo), Germany (Pork Pie), and Japan (Jimco).

For instance?
That link is to one writer, Jo Ann Greene, who if you've read some of her work, can hardly be called a "critic". She's a cheerleader!

Since this was released in a pre-internet era, there are few reviews of "Dub 56" on-line. However, since I used to work for Moon as their head of promotions/marketing, I remember distinctly that we had a big file containing lots of reviews clipped from newspapers, music press, and fanzines. I can ask Jeremy Patton who has the Moon archives to dig some up...

Back in the 1990s, Jo-Ann Green used to write for Alternative Press...so I think that qualifies her as a music critic, no?

Ok then, heres 'MY' review:

I remember heading down to the old Moon Ska store front on Avenue A to buy 'Dub 56'. It didn't leave my CD player for months, still love this album. Coolie was amazing on his tracks & the energy on this record from the band is like a live show.

With all due respect to the Toasters catalog, in my opinion this is the best Toasters album of all time.

Thanks for your comments, Paul.

That was a whole different band from today's. Ok, bands evolve... But in this case... I dont know.

Didn't realize Jo-Ann wrote for Alternative Press. Sure, that qualifies her as a critic then. I've only seen her work online and its prenaturally positive.

Er, preternaturally positive, that is.

I think Jo-Ann really does love ska music, though I'll readily admit that I don't think I've ever come across a negative review that she's written. Your point is well-taken!