The Return of Gaz's Rockin Records?! 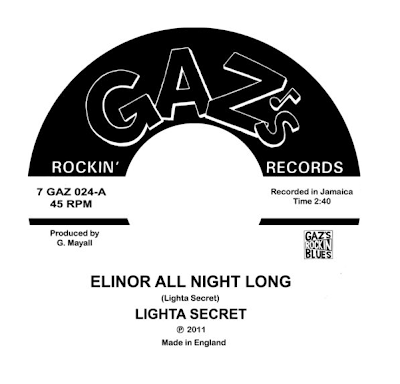 Since I'm a massive fan of the late 80s UK and Euro ska scenes, I sometimes find myself searching eBay for releases that I kick myself for not picking up back in the day (well, it often boiled down to not having that much spare cash back then to mail-order all I wanted through Unicorn Records--during that time I was in my last years of college and then endeavoring to pay rent anyway I could).

While I have a fair number of the CDs, LPs, and singles released on Gaz Mayall's brilliant Gaz's Rockin Records (which featured his band, The Trojans; Laurel Aitken and the Potato 5; The Ska Flames; and The Forest Hillbillies)--I actually won an almost pristine 7" single of The Forest Hillbillies "The Munsters" a few weeks ago (and had no idea that it even existed in this format)--every now and then I'll plug the label's name into the eBay search field. Most of the time, whatever comes up I already have, but today was markedly different. In a very good way.

Gaz has pressed a new single on his label (!) featuring Lighta Secret--and he recently found about 100 mint copies of Prince Buster & The Trojans' "Stack-o-Lee" 12" (released in 1989) that had been forgotten in a storage locker (both can be ordered here). Needless to say, I've bought a copy of each.

Here's the scoop on the Lighta Secret single from Gaz himself:

Recorded on my recent trip to Jamaica with my partner and club DJ Elinor Fahrman, alias Baby Soul. We stayed in a small coastal village, Cousins Cove, situated between Montego Bay and Negril, where we met the illustrious singer Lighta Secret, somewhat of a local legend. A real character and top entertainer from nearby Green Island. He’d been performing at a local showcase supporting Richie Spice.

Lighta Secret’s name is due to the fact that every time he performs his music live at a dance the audience all take out their cigarette lighters and raise them in the air aflame. One of his many gimmicks is to make symbols with his one complete hand in the form of unusual handshakes. The fingers on the other were lost in a machete attack while climbing out of a bedroom window at a girlfriend’s house on the sudden return of her husband.

On both sides of this record Lighta Secret raves about and praises Gaz’s Rockin’ Blues – London’s number one blues dance – bigging up the DJs, myself Gaz, Baby Soul and Natty Bo.

Even though I've never heard of Lighta Secret, Gaz has impeccable taste in music--so I'm very much looking forward to putting the needle on this record. And I'm thrilled that Gaz's label is back in business after far too many years of being dormant.

Here's hoping that this is the first of many more records to come...
Posted by Steve from Moon at 12:10 AM

great find! I have 2 of those Buster 12"s and am a big fan of the label and man as well. Will have to try to snag a copy!

Thanks for the tip! I ordered the single today.