The Apple Stomp presents: Big D & the Kids Table, J Navarro & The Traitors, Sgt. Scag, Brunt of It, The Pandemics

Otto's Shrunken Head
538 East 14th Street (between Avenues A & B)
Manhattan/Alphabet City
21+/No cover, but bring $ for band bucket

Otto's Shrunken Head
538 East 14th Street (between Avenues A & B)
Manhattan/Alphabet City
21+/No cover, but bring $ for band bucket 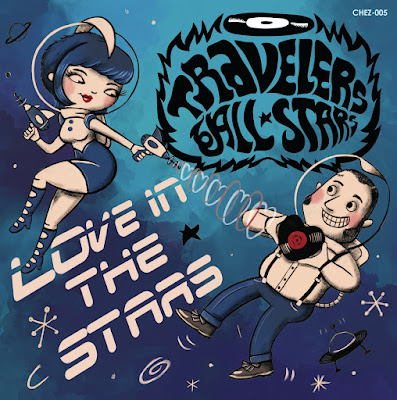 In the wake of their incredible 2020 Introspección LP (which I reviewed here), Venezuela's Ska Jazz Messengers have released a sweet early reggae version (via Lloyd Charmers) of Curtis Mayfield & The Impressions' "It's Alright" b/w their own song "Aunque Todo No Esté Bien," which translates to: "even if everything is not alright" (7" vinyl picture sleeve single/digital, Liquidator Music, 2021; ska fans in the US can order the 45 and other Liquidator releases through Beat Surrender Records in Portland, OR).

"It's Alright" was, of course, featured in the Pixar movie Soul (and was performed by Jon Batiste) and follows a string of great SJM covers of pop tracks by Pharrell Williams ("Happy"), Bruno Mars/CeeLo Green ("Forget You"), and Carole King ("It's Too Late").
+ + + +

Mexico's Travelers All Stars' new single "Love in the Stars" b/w "Weekend Lover" (7" vinyl picture sleeve single/digital, Chez Nobody Records, 2022) is another fantastic set of luminous, organ-drenched, instrumental skinhead reggae cuts (read my review of their "Reggae Gordo for Days and Extra Days!" single here). Spin these space-age reggae tracks to brighten your mood (or get in the mood) or shake some action on the dance floor! 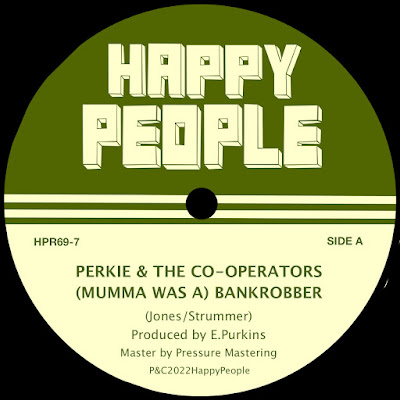 I'm always crazy for well-done Clash covers and the boss new single from Perkie & The Co-operators, "(Mumma Was a) Bankrobber" (7" vinyl single, Happy People Records, 2022), is no exception. According to Tony Fletcher's book The Clash: The Music That Matters, after London Calling--which was a bit too America-centric and American-sounding for many UK fans and some in the British music press (though the record was a bit hit in the USA because of it all)--The Clash intended to release a series of singles in 1980 in the UK to placate all the disgruntled naysayers.

Initially (and bizarrely), CBS refused to release "Bankrobber" as a single and only did so after it appeared on a B-side in Holland and sold rapidly as an import in UK record shops. Once it was issued as an A-side in the UK, it shot up the charts to the #12 position. Sadly, The Clash decided to scrap the rest of the series of singles, even though they were vindicated in their selection of "Bankrobber." Instead, they then decamped to NYC to record the magnificent, if messy, triple-LP Sandinista.

As much as I love "Bankrobber," I have to admit to never examining the lyrics of this song closely (I could always make out the chorus, but Strummer's oftentimes ragged enunciation obscured some of the verses for me--I always thought "someday you'll meet your rocking chair" was "someday you'll meet your rocketeer" and couldn't make out the rest of that verse!). In addition to being another in a long string of Clash rude boy/rebel/outlaw-glorifying tracks (see "Guns on the Roof," "Rudie Can't Fail," "Guns of Brixton," "I Fought the Law," and many others), "Bankrobber" slips in a fiercely anti-capitalist message about the exploitation of workers--which sort of provides a rationale for the banditry, but definitely gives it much more depth and meaning. (And the bankrobber's gender has been switched for this cover because women can be just as equal opportunity bad-ass and rebellious as men...)
Mumma was a bankrobber
But she never hurt nobody
She just loved to live that way
And she loved to steal your money

Some is rich, and some is poor
And that's the way the world is
But I don't believe in laying back
Sayin' how bad your luck is

So, she came to jazz it up
Never learned to shovel
Break your back to earn our pay
Don't forget to grovel

Old girl spoke up in a bar
Said, "I never been in prison
A lifetime serving one machine
Is ten times worse than prison"

Perkie's laid-back/matter-of-fact and almost delicate delivery can be read as world-weary--certainly not a bad thing since it contrasts so well with the crisp, bright 'n' brisk music underpinning it.

The flip, a take of sorts on "Rockers Delight," is a sweet dub version of the A-side, with long instrumental stretches ripe for toasting over when the soundsytem is set up, should anyone be up to the task.

Fun fact: Tony Fletcher also wrote the liner notes that appear on the back of The Toasters' Thrill Me Up LP.