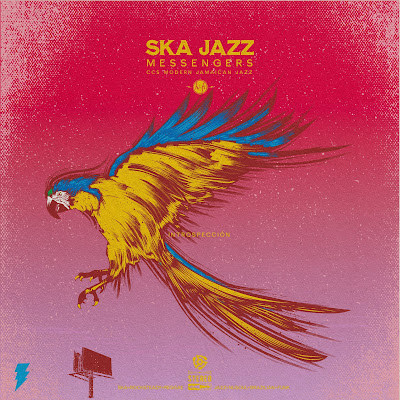 Even though their home country has been in the midst of economic collapse, political chaos, and social unrest (and, no, I'm not referring to the United States here), Venezuela's Ska Jazz Messengers led by Rafel Frías have managed to pull off a minor miracle with the release of their debut album Introspección--an impeccably produced record filled with gorgeous and superbly crafted ska-jazz tracks.

Many of the songs on Introspección are in an elegant Skatalites/Jamaican jazz vein--see the magnificent "Tunja" mixed by Victor Rice; The Mighty Vikings' cover "Up and Down" with Jump with Joey's Joey Altruda on guitar and double bass; their single "Mil Veces No" (which we reviewed previously); and "Asian Moon" with Desorden Publico's Horatio Blanco on vocals and guitar, and Ego-Wrappin's Takeshima Satoru on alto sax. Others veer into the sophisticated jazz-pop-reggae that Tokyo Ska Paradise Orchestra does so well, such as the lush, bossa nova-tinged "Una Hermosa Noche" and moody "Bajo la Lluvia" (both with famed Japanese reggae keyboardist Hakase-Sun); the sultry "Cuando te Miro" (which incorporates a bit of Roberta Flack's "Where is the Love?"), and the hopful and ethereal "Al Mundo Recrear" ("Recreate the World")--both showcase SJM's Ruthsy Fuentes' wonderful vocals; and a jaunty version of Emerson Kitamura's "Dokoyukuno" with Kitamura also on organ. Following the mad success of their cover of Pharell William's "Happy," Ska Jazz Messengers tackle another chart-topping hit with their winning version of Bruno Mars and CeeLo Green's "Forget You," which is recast as the pop-jazz-reggae "Sigueme" ("Follow Me"). But the best cover on the album is their take on Carole King's '70 soft rock smash "It's Too Late" with The Delirians' Angel Salgado on vocals--it's absolutely phenomenal.

Ruthsy Fuentes' vocals are captivating on this project would like to hear her more!