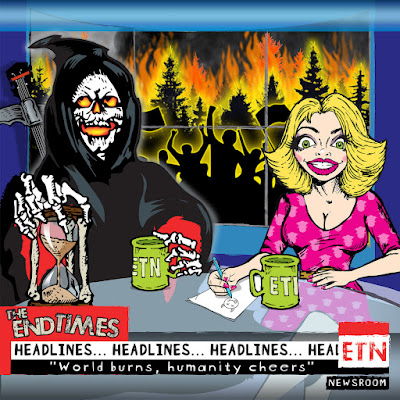 I wish I had first listened to The End Times' ferocious and bitter new Headlines EP before the recent midterm elections when it seemed like TFG's goon squad of fascist candidates were destined to ascend to the levers of power in many state and federal offices and drag our country closer to the straight, white, male, evangelical-nationalist, authoritarian hellscape they literally pray for. Lucky for us, the forces of sanity reigned (for now), so I have some hope for this country. My level of existential dread has waned a bit, though it's still lodged in some recess of my gut. The racist, anti-democratic creeps still lurk in large numbers among us.

If you caught The End Times' terrific self-titled debut (read my review), you know that their brand of Armagideon ska--horn-driven, aggro '90s style modern ska paired with body-slamming Fear-like hardcore vocals--was a good antidote/commentary on the horrifically cruel and morally bankrupt MAGA years. Their new EP Headlines continues in that vein, though is more generally focused on expressing white-hot anger/exasperation over humanity's abject failure to live up to its extraordinary promise. It's about dashed, stomped-to-death hopes about us all solving our problems and getting things right.

"Little King" pleads for the de-throning of the petty, selfish tyrant in all of our heads that keeps us from doing the right thing. And "Punishment" rails against the infuriating inevitability that the rich and powerful will never pay for their crimes. (Though I still hold out hope that a full reckoning is coming for TFG...)

The End Times bring their brilliantly powerful and tight live show to Otto's Shrunken Head tonight in Manhattan's Alphabet City (it's Headlines' record release party!). The Simulators (CT) and The Manipulators (PA) also are on the bill (plus DJ Yana Lil' Jerk!).