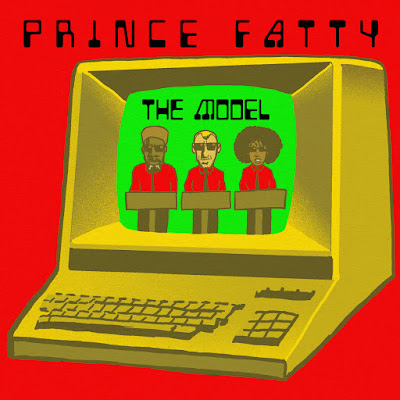 Originally slated for release this past April for Record Store Day 2020 (that is until the coronavirus pandemic hit), Prince Fatty's terrific cover of Kraftwerk's "Das Model" featuring Shniece Mcmenamin and Horseman will now be issued on July 3, 2020. This track, of course, was first released on Kraftwerk's The Man-Machine in 1978, but went stratospheric when re-released in 1981 as the B side to the "Computer Love" single during the height of synth-pop in the UK. (The song has been both criticized for objectifying women and interpreted as a commentary on the commodification of desire, as well as the male gaze and scopophilia.) The wonderful simplicity of "The Model" has lent itself to being easily recast in many genres (name a style of music and there's been a cover version of it done) and its immediate catchiness makes "The Model" an ideal and enduring pop song. In Prince Fatty's boss reggae version, the synths remain artificially chilly and the riddim is rigidly martial, but Shniece's vocals are mighty alluring and Horseman's toasted commentary provides humanizing depth ("She's a modeling queen/'Cause she nice up the scene"). While it was recorded well before Kraftwerk co-founder Florian Schneider's death this past April, this single serves as a fantastic tribute to this incredible musician who was an essential part of one of the most influential bands of all time.