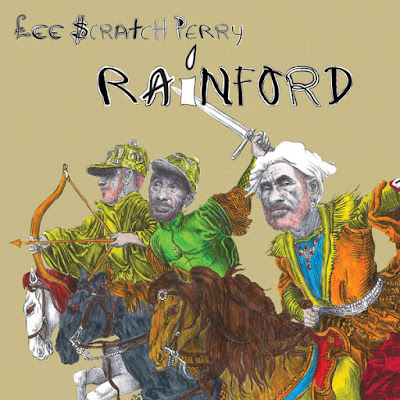 I have to admit that following 2018's excellent, Black Ark-sounding The Black Album (with ace producer Daniel Boyle), it took repeated plays for me to get into Lee Scratch Perry's latest album Rainford (CD/LP/digital, On-U Sound, 2019), co-produced and co-written with On-U's Adrian Sherwood. Now that all of these tracks are firmly embedded in my head, I've found that it's very much on par with Perry and Sherwood's phenomenal, left-field classic Time Boom X De Devil Dead, recorded with Dub Syndicate in 1987 (Sherwood and Perry's most recent collaboration was The Mighty Upsetter in 2008). Like Time Boom, Rainford is filled with brilliantly inventive sonic weirdness married to quirkily catchy and compelling reggae tunes--and is sure to be recognized as another essential Lee Scratch Perry album in a catalogue bursting with them.

As expected, Rainford contains common Perry themes (driving out/vanquishing evil; toppling the powerful and selfish rich--see the album artwork) and messages (of black empowerment, anti-racism, and the wisdom of Jah's righteous ways). And as always, there's great substance beneath the seemingly mad surface of exhortations and vocal sound effects (Perry mimicking the cries of babies, the bleats, neighs, and grunts of various animals, and horror movie screams). Perry knows full well that his decades-long reputation for being a bit of a lunatic gives him considerable freedom (or lee-way!) to express some heavy and--what establishment society might consider to be--dangerous ideas and opinions.

Album opener "Cricket on the Moon" begins with Perry reciting, "'Repent,' says the cricket on the moon/'Repent,' says the cricket in the room...Mercy call and judgment come." I've never encountered this expression before, but apparently a moon cricket is an ugly racial slur. In this context, Perry is subverting an aspect of this racist trope--essentially, a black person in a sea of whites--as a metaphor for rastas/Jamaicans/people of color struggling against the dominant, sinful Babylon ("I'm the man in the moon/Who kicked the Pope in him raas"). In addition, there could be another layer of meaning rolled into this song, as 2019 marked the 50th anniversary of Neil Armstrong being the first (white) human to step on the moon (when researching this epithet, I also found that supposedly Native Americans have used it as a derogatory term for white people). Naturally, cricket-like chirps are incorporated throughout this wonderful, loping reggae track.

The slightly off-kilter "Run Evil Spirit" is in the same vein of Perry and Max Romeo's "Chase the Devil," with various upstanding rastas (whose religiously proscribed diet includes a lot of fish--hence, "fisherman," with its Biblical echoes) and super humans (Perry refers to the "Bionic Man" at one point!) joining forces to rid the land of wickedness: "Fisherman come/Babylon run...Beggars, users, run/Superman a come/And I've told him what you've done, evil spirit/I said you run/Obeah man a run/Spiderman a come..." Unlike most of the mid-tempo tracks on Rainford, the propulsive, almost hypnotic "Makumba Rock" has the power to pack dance floors and refers to the Brazilian via Africa religion of Macumba: "Voodoo rock/Zodiac rock/Makumba rock...From roots asylum/This is mental zodiac/Are you ready for the black magic?"

Perry pictures himself as captain of a futuristic Black Star Liner on "African Starship" (which revisits/reworks Creation Rebel's 1978 Starship Africa), repatriating the black diaspora to a new Ethiopia somewhere out on the final frontier. While, the hard-hitting, militant-sounding "Kill Them Dreams Money Worshippers" envisions Perry entering the nightmarish, fever dreams of the rich to scuttle their rapacious, predatory scams before they can unleash them in reality and cause good people to suffer ("In the land of dreams/The greed is dead/In the land of schemes/Settle dem debts/In the land of flesh and bones/More than stones and bones/Rocklin' horror movies and scary scenes/A horrible place...We're going to have a black magic for you tonight...We are inviting you down to meet your debt...").

Perhaps the most extraordinary song on the record is "Autobiography of The Upsetter," which is exactly what the title indicates. This is Lee "Scratch" Perry's life's story ("This is my undead biographicie and prophesy"), told with surprising candor, self-awareness, and humor. Perry recounts his familial origins ("My Father was a Freemason, my Mother was an Eto Queen/They share a dream together/Said they're going to make a Godly being"; Rainford is Perry's actual first name); the many highlights of his extensive musical career (and related music industry axes to grind--the listener is reminded that Perry still believes Island's Chris Blackwell to be a bloodsucker); even the episodes of his life where people questioned his sanity, when he was actually profoundly troubled by pernicious goings on in the world around him ("People thought I was mad... Burn down Black Ark/Too much iniquity, too much outerquity was in the Ark/People thought I was crazy...walking backward in Spanish Town"). In sum, it recaps his incredible, visionary artistic legacy, which Perry continues to augment with records like Rainford: "I came up with the Ark, with salvation/And let the people dance/And give the people a chance/I am the Upsetter/Super Ape/Dub organizer, music striver/Pipecock Jackson/Lee Scratch Perry."