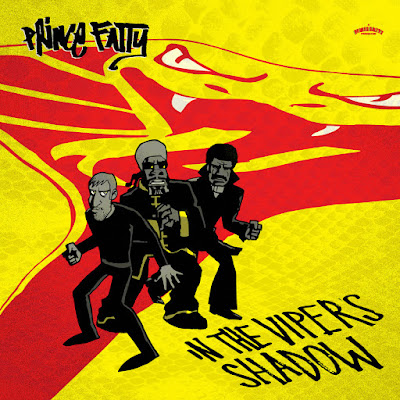 "Everything Crash" is the fantastic second single released in advance of Prince Fatty's forthcoming In the Viper's Shadow album, which will be issued on October 4, 2019 and can be pre-ordered now (the first single off this record was "Get Ready," which we reviewed here). This track, of course, is a cover of The Ethiopians' 1969 hit (inspired by public worker strikes during an economic crisis in JA in '68: "Firemen strike/Water men strike/Telephone company, too/Down to the policemen, too...What gone bad a-morning/Can't come good a-evening, whoa/Every day carry bucket to the well/One day the bottom must drop out"), but in this version--featuring the always brilliant Big Youth and wonderfully mellifluous George Dekker (The Pioneers)--the concern is about global environmental collapse due to humanity's incredibly poor stewardship/outright abuse of the planet. Big Youth impassionedly chats: "People need to take a check and look at what we do/Take a likkle stop and look at what we do/Leaders of government/Leaders of war...We need to take of our nuclear waste/We need to find a better place/Global reasoning/This is global argument/There's so much emission in the air..." (he goes on to decry fluoride in the water, though that seems pretty low on the list of extraordinary damage we've done to the land, air, and other living things, but his point is still well-taken--the water's not pure and clean). With this track, Prince Fatty, George Dekker, and Big Youth have created an "Armagideon Time" of sorts for our man-made global warming Anthropocene era. As always, this is a top Prince Fatty production and signals just how great his In the Viper's Shadow is likely to be...