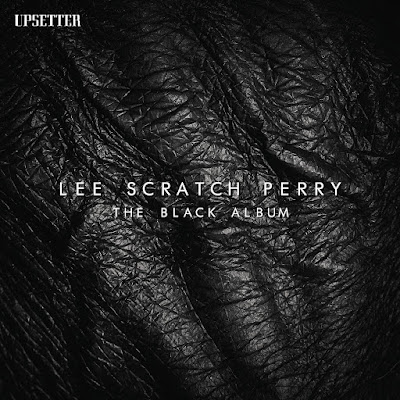 On The Black Album, Lee "Scratch" Perry collaborates again with co-producer Daniel Boyle (who also recently worked with Max Romeo on his fantastic Horror Zone in Boyle's Black Ark-modeled Rolling Lion studio), since their initial foray--2014's Back on the Controls--garnered a Grammy nomination and great notices. As with that release, Boyle's and Perry's mission on The Black Album is to capture the sound and spirit of Perry's spectacular 1970's analog Black Ark productions (Upsetter keyboardist Robbie Lyn plays on many cuts here), which were exceptionally warm, organic, and had a vibrant immediacy, and featured otherworldly percussive and aural effects resulting from Perry's masterful, spur-of-moment inventive, and wildly unorthodox approach to music and studio production. And it will come as no surprise that they've accomplished all this again here on a terrific new set of roots reggae cuts and their excellent track-for-track dub versions.

According to the liner notes, during the recording of this album Perry referred to the sound as "black," which then needed "space, light, and darkness" to help give it form and definition--all of which implies that there's a necessary ying and yang type of harmony/balance for everything in creation (including the diversity of people). This point is perhaps best illustrated on the wonderful and most perfectly realized track on the album, "Your Shadow Is Black" (and accompanying dub!). It's a bright, mid-tempo reggae cut with flute, melodica, harmonizing back-up singers, and Perry singing/saying stream-of-consciousness lyrics (he even makes kissing sounds at an appropriate spot): "Whirlwind and fire/Dark shadow in the room/Love your shadow/Your shadow is black/Your shadow is mud/Your shadow is God..." The Old Testament reference to Sodom and Gomorrow (Gomorrah) and mention of an ominous dark shadow on the moon suggests that evil is amongst us always (as a contrast with the good and righteous), but also infers that there will be divine punishment for wicked doers (the Lot reference in "Your Shadow Is Black" made me look up Perry's work on The Congos' magnificent "Sodom and Gomorrow" to compare their productions and they're incredibly similar in sound and vision!).

The great, eerie album opener "Mr. Brown In Town" makes direct lyrical reference to the Glen Adams-penned Bob Marley and the Wailers song "Mr. Brown" (which versioned Jackie Mittoo's "Pennie Wallie" and was based on a rumor about a ghost "upsetting" everyone by riding around Kingston in a three-wheeled coffin with three crows riding on top asking for a Mr. Brown; Perry also sang about "Mr. Brown" on his 1998  "Dr. Lee PhD" collaboration with The Beastie Boys). Essentially, "Mr. Brown In Town" declares that Perry is back "on the street again," "I'm still alive/refuse to die," and asserts that rebels/devils in the poor, violent Back-o-Wall slum don't fear Mr. Brown (and at one point--message to the Resistance--when exhorting Mr. Brown the clown to get out of town, he inserts "Trump!" instead of Brown).

Other standout tracks include the (expected and) knowingly boastful/self-aggrandizing "Trendsetter" ("Lee Scratch Perry/Upsetting the universe") and "Captain Perry" ("...of the mothership/Captain Perry/Don't miss a trick")--and perhaps Scratch isn't a big fan of some forms of reggae (see: "Killing Dancehall Softly"). Perry mounts a more-than-credible defense of being a vegetarian on "Dead Meat": "666/Me no eat meat...I'm so crazy because I don't eat dead flesh...No cannibals/You gotta to believe in animals." (Just the other day, I saw a video of Perry singing to cows in a field...) I'm not completely sure of the message being conveyed on the amazingly upbeat "Solid State Communication" (Perry as the instrument of God's word?): "Genesis/Revelation/I'm the Bible/I'm black Jesus...I am the God of Creation/I am the Lord of the Lords/Solid as a rock/King of Kings/And Lord of Lords/Conquering Lion of Judah/Solid state logic communication/The Upsetter...I'm a computer!" Of course, few but Scratch can pull off something like this so spectacularly well.

At 83--in his sixth decade of continually making and producing groundbreaking music--Scratch continues to move forward, always creating and amazing all with the results. (May everyone be so fortunate in their own lives...) Needless to say, fans of Perry and roots reggae will be more than pleased with The Black Album.