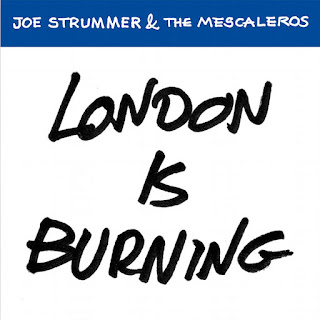 In advance of Joe Strummer 001, the new 32-track collection of his somewhat rare and unreleased (12 of them!) pre- and post-Clash (Mark 1) music, comes the new single "London Is Burning"--a truly fantastic, (punk) rocking alternate version (with an incredible Midnight Oil-sounding bass line) of the subdued and ballad-y "Burnin' Streets" that appeared on his posthumous 2003 album with The Mescaleros, Streetcore.

Written a quarter of a century on and with echoes of The Clash's 1977 track "London's Burning"--about being bored, frustrated, and aimless living in the tower blocks, but kind of excited by all the possibilities that presents, too--"London Is Burning" has more existential concerns, like how to get by on streets that have gotten meaner and bleaker: "It takes every day to be surviving in the city/Ready to face a dawn with no pity" and "There's too many guns in this damn town/At the supermarket/You gotta duck down/Baby flack jackets on the merry-go-round..." Can't just be lost in the market any more. (The mind reels at what multiculturalist Strummer would be singing about these days.)

There's also this great turn of a phrase in the break: "There's a love triangle on a two-way street"; and this verse filled with still relevant uncertainty and disorientation: "A century that's hardly on its feet/The late news breaks early/Does the sun rise from the West or from the East?"

Here's hoping there are other revelations like this in Joe Strummer 001.

Note: This 45 is one of the extra goodies offered with the deluxe version of this compilation, but copies of this single are available from joestrummer.com.

Further reading: The Duff Guide to Ska review of Joe Strummer and The Mescaleros' "Live at Acton Town Hall." ("London Is Burning" was was originally titled "Fire Fighting Street" and written for the Fire Brigade Union benefit show at Acton Town Hall on November 15, 2002.)

Email ThisBlogThis!Share to TwitterShare to FacebookShare to Pinterest
Labels: Duff Review, Joe Strummer and The Mescaleros, The Clash