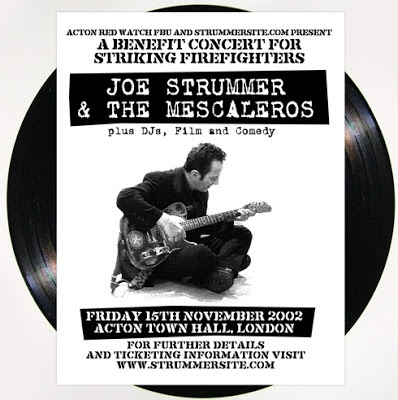 If you happen to be one of the lucky few who were able to pick up one of these limited-edition double LPs (only 2,200 were pressed) of Joe Strummer's last concert (recorded on November 15 2002--a little more than a month before his decades-too-early death on December 22, 2002), what you have in your possession is an incredible testament to Strummer's extraordinary career and his many gifts as a songwriter and performer. It's almost like having another Clash record from him, especially with Mick Jones playing on three of these cuts (a reunion that was two decades in the making!). If he had to leave this earth--and, god, how I wish it weren't so--this last live album is one hell of a way to go out.


While I always appreciated the cuts on the three Joe Strummer and The Mescaleros albums, I never really loved these songs as much as I did The Clash's, largely because I wanted more Clash songs from Joe, while he was more interested in incorporating world beat sounds into the mix (and in the lean years between the end of The Clash proper and Strummer starting up with The Mescaleros, only a few of his solo tracks were really satisfying--"Love Kills," from the "Sid and Nancy" soundtrack and "Trash City," from the "Permanent Record" soundtrack). All of these years later, The Clash are still "The Only Band That Matters" to me (I revisit all of their albums regularly) and that's probably why I never got around to seeing Joe and The Mescaleros when they played NYC (a great mistake, I know). But having heard the JSATM tracks live here on Live at Acton Town Hall--they really come alive in a way they never on their CDs.

The implicit endorsement/celebration of multiculturalism in the UK through the host of take away food options in "Bhindee Bhagee," from 2001's Global a Go-Go, has more funk and bite and kick to it, while the apocalyptic "Tony Adams" (about "a catastrophe hitting New York"--in the aftermath of mega-storm Sandy, it's interesting to hear Joe sing about the lights going out on the Eastern seaboard, not being able to find a working phone, and lyrics like, "The whole city is a debris of broken heels and party hats/I'm standing on the corner that's on a fold on the map"), from 1999's Rock Art and the X-Ray Style is more raggedly desperate. I'm surprised to find myself digging two cuts from Strummer's last studio album, 2003's Streetcore, which I don't remember liking much the first time I heard them: "Go Down Moses" is pumped up with much more righteous fury and dread (Strummer pretty much demands everyone's deliverance from Babylon--and if the gods won't heed our supplications, then he'll goad us into taking matters into our own hands: "When I got to the mountain top/tell you what I could see/All of the other boys running/from the priests of iniquity/Where the hell was Elijah?/Anyone of you would do/From a cloudburst on a mountain top/the prophesy game was through/Let's take down Jericho/Let's make or break it, bro"); and "Coma Girl" (a post-modern Shagri-Las-like walk on the wild 'n' druggy side about a "Mona Lisa on a motorcycle gang" that hits all the end-of-days desert music festivals like Burning Man) reveals itself as a surprisingly catchy pop-punk-reggae song with a killer chorus.

Now for what you've really been waiting for. The Clash tracks covered at Acton Town Hall--which largely favor the band's punky reggae output--are pretty fantastic (the best to be hoped for, short of an actual, and now impossible, Clash reunion). The faithful-enough (but far from rote) renditions of "Rudy Can't Fail," "(White Man) In Hammersmith Palais," an almost 10 minute "Bankrobber," and Junior Murvin's "Police and Thieves" (dedicated to Paul Simonon and Nicky "Topper" Headon) give the people what they want and then heap on more. On the punk tip, Eddy Grant's "Police on My Back," Sonny Curtis's/Bobby Fuller's "I Fought the Law," "White Riot," and "London's Burning" are all-out scorching--especially with Jonesy on the latter two cuts. If these don't get your blood pumping, schedule an appointment with the doc to be fitted with a pacemaker.

"London's Burning" (first recorded by The Clash 25 years earlier, when the two sevens clashed)--which rails against a society that doesn't have much more to offer working class youth on a weekend night than driving around aimlessly or vegging out on TV and warns that all this boredom will eventually lead to civil unrest--was the last song that Joe Strummer ever performed live. It's brilliantly fitting that this 50 year-old punk rock warlord would still be singing rebel music, giving voice to society's voiceless and raising money for striking firefighters, to the unexpected end.

Live at Acton Town Hall is available digitally on the back end of the new-ish, 57-track compilation Joe Strummer and The Mescaleros: The Hellcat Years, which was released on what would have been Joe's 60th birthday on August 21, 2012. Oddly, there is no CD version of this comp, though Joe certainly deserves one.

(To this day, I still can't believe that I snagged a copy of this double LP; I went to J and R Music in Lower Manhattan in the middle of Record Store Day on Black Friday and since they had hidden--yes, hidden--all of the RSD releases in the basement, on a completely different floor from the music department, so no one knew these records were even there. I sauntered in, bought one, and that was that. I had been to earlier RSD days there when they sold RSD releases in the music section on the main floor and masses of people were jostling and climbing over each other to snag their coveted singles and LPs. It's so bizarre--usually J and R is much better at staging and promoting these types of events. Having said that, their misstep was my gain!)

The Live at Acton Town Hall packaging doesn't contain any track list, but here it is, spread over four LP sides:

Great post! Looking forward to getting a copy of this.