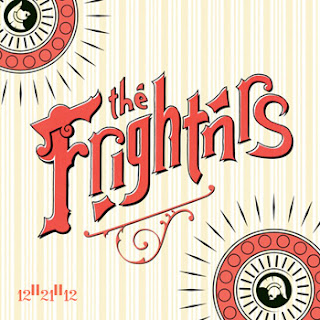 Just in time for the holidays (though missing Hanukkah by a couple of nights), NYC's reggae/rub-a-dub kings The Frightnrs stuff our stockings with some choice musical sweets--via this stellar four-track 12/21/12 digital EP (masterfully produced, recorded, engineered, mixed, and dubbed by Victor "Ticklah" Axelrod)--that will keep you grooving long after the tree has been reduced to mulch (and is fertilizing the bushes in some city park) and the ornaments and lights are packed into the hall closet.

Despite its incredibly lovely and lush melody (what love would sound like if it were music), "Never Answer" is about the tension in a relationship that arises when others try to sow the seeds of mistrust in order to destroy it. The singer pleads for his girl to believe in him and their love--because he's never going to dignify, or give life to, the accusations with any kind of response: "I know I never give you any answers, girl/I love you/I'll give you everything but my heartache/I bet you want that, too/No matter what they say, I'll always be there for you/I'm your guy/And if you ever have any doubts, girl/I promise it will be the last time/I'll give you my heart, all of my soul/Everything that I own/For it is better to die a beggar, than to go on all alone..." Singer Dan Klein is so damn sincere in his delivery that you'll believe him, too (even if the excellent dub of this track is called "Questions" and seems to serve as an instrumental response to his grandiose declarations).

The unfairly-accused narrator (more fool for a pretty face than anti-hero) of the spaghetti Western cut "Admiration" ("They're gonna punish me for something that I didn't do!") is desperately determined to evade his pursuers, since capture will certainly subject him to vigilante justice: "I didn't know her before today/Now, I'll walk across the sand/and I'll sail across the sea/They've got their nooses ready/hanging underneath a tree/With their horses and their guns/they've got this man on the run/But what I have done remains a mystery to me." The precise and relentless beat of this track conveys the pressured urgency of continually pushing forward to stay free and, more importantly, alive--while a ringing, almost shimmering solo guitar line conveys his loneliness as he plods across a bleak, sun-baked landscape that stretches to the horizon and offers no sanctuary. (The dub of "Admiration" features some nice cinematic touches: a sound clip of "From now on you oughta be lookin' behind you, 'cause one day you gonna get a bullet in your back!"--followed by a grandfather clock chiming the dread hour of five o'clock, and the odd ricocheting bullet.)

Hopefully, someday someone is going to combine the tracks on The Frightnrs' 12/21/12 with those from their equally fantastic six-track self-titled EP (read The Duff Guide to Ska review here) and put all of this out on vinyl and CD. Music of this quality deserves to be on something almost permanent, because--like me--you're going to want to keep coming back to these songs again and again for a long time to come.

Here's a video that I shot of The Frightnr's performing "Admiration" at Electric Avenue on 10/13/12. The band is really hot live, so make a point to see them in person!