Editor's Note: As the end of the calendar year sneaks up on me--as it always does, since the fall is always so damn busy!--I always scramble around to put together my "best of" lists of the ska singles, albums, reissues, books, etc. that I really enjoyed over the past year and want to highlight for all the ska fans out there. But I also thought it might be interesting to feature some other opinions, so I approached a diverse group of ska musicians, bloggers, DJs, and label heads to find out what their favorite ska things were in 2012. And thus the "2012: The Year in Ska" series was born! Thanks to everyone who is taking the time to participate--I really appreciate it! 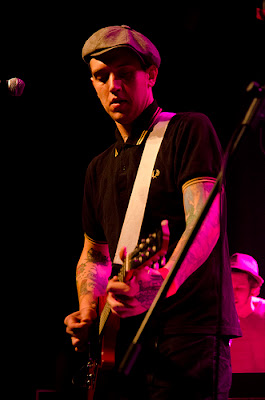 I first became acquainted with Sammy Kay when he was a member of The Forthrights. Since then, he's struck out on his own with some help from The Fast Four, when he's in NYC and The East Los 3, when he's in LA. As anyone knows who's met him, he's a good guy (and a damned talented one, at that)!

1) The Pinstripes: I - Not for nothin', this band rules, and this record is flawless.

2) The Bandulus: Times We Had - Jeremy and company are at it again, and just killing it, the ska, rocksteady, perfect, the soul, man, I wish I was in that band.

3) The Slackers: Radio - "The Letter" makes this record worth it, "Like a Virgin," "Attitude." It just shows that The Slackers are a force that will not be moved.

4) Maddie Ruthless and The Forthrights - Shocker. right? I play on this record, but I got to say, all things aside, this record is really great, and it really captures exactly where we all were at that time.

6) Uzimon: Pussyweapon - Again, fuck the haters! This is my jam!

7) The Snails/Heavy Beat Split EP - The Snails got a good year ahead of them, they listened to what the "elders" said, and worked hard to get real good. Looking foward to The River EP this month!

I did about seven months of touring this year, so this is kinda hard. I'll end up thinking of awesome nights that I forgot about, but here are the first five that come to mind.

1) The Slackers' Boat Show (both nights) - I had two days off of a tour I was on and ended up at both nights. Drunken debauchery and a great night.


2) The Aggrolites/Old Man Markley/Hub City Stompers: The Gaslamp, Des Moines, IA - Again, drunken debauchery, awesome club. Did three shows that tour with Aggro and OMM and this was definitely the most fun. My organ fried out, whatever. This and San Antonio were the highlights of that tour.

3) The Slackers/The Bandulus: The Maison, New Orleans, LA- The show ended early, we all went out to Molly's on Decatur... I remember the show being fun, but I think the night was more fun after. Does that count?

4) The Skatalites/The Delirians: Los Globos, Los Angeles, CA - I'm just listing this one show, but I did about 30 Skatalites gigs this year, and every one was just great. Every day I got a little story about Studio One, and the old singers, and sessions, and tunes. It was great time.


I went to Ska Brewing this year, got a bunch of shirts and beers that were awesome. The hangovers they gave me, not so awesome. I get a lot of shirts on tour, too many to consider. The Duppies gave me a beer cozy that I have in my backpack at all times. I got a new Green Room Rockers sweatshirt, which a pretty girl in Brooklyn traded me for a Bouncing Souls sweatshirt, that I wear just about every day. My favorite piece of merch that I got this year would have to be a t-shirt my friend Brian gave me right before I left on the first Sammy K tour I did. It's super arrogant, and just says "PMA ALL DAY." Definitely my favorite merch score this year.

2) But then again, too few to mention.

3) I did what I had to do and saw it through without exemption.

4) I planned each charted course, each careful step along the byway.

1) Personally, I want to go to Europe. I've never been and I hear it's fucking awesome.


2) That people dig the records I did that are coming out this year. A boy can dream, right?

5) Bands go on tour. The only way to get what you're doing out is tour. Show up, play. If there are only five people at the first show, there will be 10 the next time, then 20, then 30. Just go and turn heads. There are too many great bands that are just sitting and doing nothing. Buy a van, fix it up, go. Do it.

Email ThisBlogThis!Share to TwitterShare to FacebookShare to Pinterest
Labels: 2012: The Year in Ska, Green Room Rockers, Hub City Stompers, Maddie Ruthless, Sammy Kay, The Aggrolites, The Bandulus, The Forthrights, The Heavy Beat, The Pinstripes, The Slackers, The Snails, Uzimon