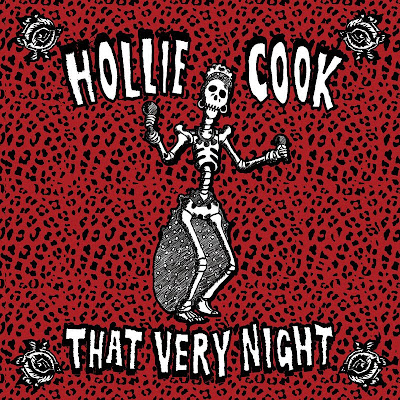 Any ska or reggae fan that is wise to the brilliance of Prince Fatty (read The Duff Guide to Ska review of this ace reggae collective's latest singles here) knows Hollie Cook and has fallen in love with that silkily ethereal voice of hers. If you haven't had the good fortune to come across her recordings, here's what you need to know: she was a member of the re-formed Slits and appeared on the Revenge of the Killer Slits EP and Trapped Animal album (rest in peace, Ari Up); she's been a member/featured singer on two Prince Fatty albums (Supersize and Survival of the Fattest); and--how's this for musical bona fides--is the daughter of the Sex Pistols' drummer, Paul Cook.

The first single off her forthcoming self-titled album (Mr. Bongo Recordings, May 2011) with producer Mike Pelanconi (AKA Prince Fatty) at the controls, "That Very Night" may remind one a bit of a Specials AKA In the Studio-type reggae excursion (where Dammers delved into alienation, madness, betrayal, addiction, and agoraphobia)--particularly Hollie's detached and disaffected vocal delivery as she sings, "You are the perfect boy/for my brand new number/I have bought the purse/and the spring time flowers...all around, oh/You'll be a charming boy/not like my previous one/'Cause he disappeared and left me all alone/with my frozen heart...oh." The track is shimmeringly, nite club gorgeous, but could never mask the emptiness and pain of "going through the motions" evident at the core of Cook's vocals.

The rootsy "Milk and Honey," off the second Prince Fatty album Survival of the Fattest (2008), was something of an underground hit in the UK and even made it onto an episode of the soapy doctor drama "Grey's Anatomy" in the US. The track is about someone so removed from life--aware of everything going on, but disdainful of and unable to take any joy in it: "Every day/in the morning paper you/You got the News of the World/You're gonna make them change/It’s time to laugh all alone in your room/If only you could shine through the darkness." And the only path to salvation/deliverance (milk and honey are fruits of the promised land, after all) is to "taste" life again--to choose to live, not merely exist. (And if you don't wanna go out and live after hearing Hollie sing this cut, you probably count yourself amongst the undead already.)

If "That Very Night" hints at what is to come on Hollie Cook's debut full-length, it very well may turn out to be one of the best reggae albums of 2011.

To help promote the "That Very Night" single, Mr. Bongo Recordings is offering a free download of "Milk and Honey In My Dub"--get it here.

I think I've posted this before (but I'm not certain), so apologies if I sound like a broken record...

"Survial of the Fattest" is the second "Prince Fatty" album, the first was "The Best Of Prince Fatty" on Anvil records from 2005. The producer got in a fight with the two ex-Loafers who were the core of the concept after "Survival" was recorded and went on to brand himself as "Prince Fatty" and essentially wrote Nasser Bouzida and Trevor Harding out of the backstory, pretending none of it existed.

Crap. Jon, you are right. Forgot about that 2005 record (and you've pointed this out before). Will fix the posting now.

Thanks for helping me keep the facts straight!

Can i correct this info please. I never had a fight with nasser or trevor, after the best of prince fatty on anvil (a one off project at the time) Nasser and Trevor went back to making 60s beatnik music with their bands and we all moved on. I carried on releasing and producing records under my name Prince Fatty.

Thanks for your comments, PF! We appreciate it!

BTW: the correction I made to the post was that "Survival of the Fattest" was the second Prince Fatty release...