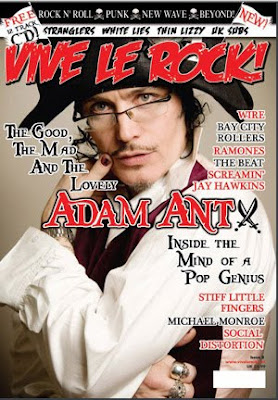 On a quick lunch break from one of my freelance gigs where I'm writing grant applications for an arts and crafts-type museum(!), I stumbled across the completely unexpected. While looking for a copy of the latest MOJO (with The Ramones on the cover!) at the dying Borders Books near Columbus Circle, I discovered a new UK music mag called Vive Le Rock! (I would have liked to have been in the conference room when they were batting around names for the publication if this is the winner) that is blatantly gunning for the MOJO readership--focusing on the punk, New Wave, alternative, and rock scenes past and present. (Adam Ant is their cover man--and "Vive Le Rock" is an Adam Ant track/album--which gives you an idea of the demographic they're seeking: middle age music fans like me who were teens during the height of post-punk/New Wave and actually still buy print media and music in tangible formats.) Vive Le Rock!'s writing isn't as consistently strong as MOJO's and the design/layout is pretty bland for a mag that aspires to be on the cutting-edge of alternative music, but, in all fairness, this is their second issue and they haven't fully gained their sea legs yet.

Whatever Vive Le Rock!'s shortcomings, it made its way to the cashier with me after I flipped through the first couple of pages and came across a feature on the 2011 London International Ska Festival and an accompanying interview with Dave Wakeling. Plus ska record reviews! Sold!

Assistant editor Andy Peart provides almost all of the ska coverage, interviewing Sean Flowerdew for the feature on the 2011 London International Ska Festival (check out the rad photo of t-boner Vinnie Nobile from Bim Skala Bim at the 1988 London Ska Fest that accompanies the article!). Peart also talks to Dave Wakeling (who always has something interesting to say), since his version of The Beat (versus Ranking Roger's UK edition of the band) is one of the key groups at the LISF. (Fun facts: Dave is open to any of his former Beat mates joining him on-stage for any of his UK dates; and he finds that Americans take everything too literally--Dave: "I miss how [in the UK] someone could say the exact opposite of what they meant, and everyone got it from the face being pulled. Irony, nuance and sarcasm: the condiments of life.")

Peart also reviews Maroon Town's new Urban Myths album (Rockers Revolt), giving it an 8 out of 10; the 30th anniversary reissue of UB40's groundbreaking, should-have-been 2 Tone-released Signing Off album (7 out of 10); the Pressure Drop Laurel Aitken collections Everybody Ska: Rudi Got Married 1980-1992 (8 out of 10) and Voodoo Woman (7 out of 10); and writes up glowing appraisals of recent live gigs (though doesn't note the dates) by UB40, The Selecter (the Pauline Black and Gaps Hendrickson version), and Madness.

Lastly, Lee Catterell raves about The Bristol Reggae Explosion 1978-1983 comp--which Jump Up is carrying in the USA--dubbing it worthy of a 9 out of 10. Don't know much about the history of this scene, but I'm going to make a point of picking up this collection after reading this...

Here's hoping that Vive le Rock! continues to develop and flourish--especially if they're going to continue to devote significant column inches to ska music!
Posted by Steve from Moon at 1:00 AM

Great review! I'm off to pick up a copy at my local newsstand tomorrow!

Thanks! I also just picked up the latest MOJO and--disappointingly--they is nary a mention of the London International Ska Fest...

Wild to see Adam Ant back in action all of these years later.