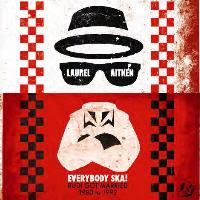 Presumably the last in what has been a series of astounding re-issues from Laurel Aitken’s extensive back catalogue, Everybody Ska! Rudi Got Married, 1980-1992 documents a momentous chapter in Laurel's career, when he transitioned from highly revered--but semi-retired--musical forefather to the 2 Tone revivalists, to a vital force on the global ska scene for the next two and a half decades. As bands like The Specials (with Rico Rodriguez) and The Beat (with Saxa) drew UK-based 60s era Jamaican stars into their orbit (Laurel had enjoyed great popularity in the UK during the sixties--particularly in '69 and '70 when he had a string of skinhead reggae "hits"), it was only a matter of time before Laurel was asked to dust off his pork pie hat, shades, and bluebeat suit. His debut for the young 2 Tone audience came courtesy of The Beat, who in February 1980 had invited him to join them on stage and sing at the Lyceum in London to great acclaim. (It should also be noted that The Beat re-worked Laurel's 1969 rude reggae hit "Pussy Price" as "Ranking Full Stop" on I Just Can't Stop It.) 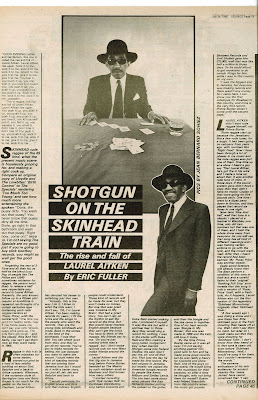 Laurel quickly followed-up by finding a more-than-competent backing band to record and tour with in the form of The Ruts, who were equally proficient at both punk and reggae, but had been sidelined by the nodes on singer Malcolm Owen’s vocal chords. Temporarily rebranded the Unitones, they joined Laurel and guest musician Rico Rodriguez to cut the “Rudi Got Married” b/w “Honey Come Back to Me” single, which was released on Ian Page’s (Secret Affair) I-Spy label in May 1980—and made it to #60 on the UK charts, his only certified pop hit. (Note how Laurel shrewdly incorporates elements of “A Message to You, Rudy” on both cuts to make his single immediately familiar to 2 Tone fans.) Laurel Aitken and the Unitones' subsequent 1980 single for I-Spy, "Big Fat Man," didn't chart, but finds Laurel in top form--and the re-working of his 1971 Trojan Records skinhead reggae hit single "It's Too Late," which I first heard on Unicorn Records' Rise & Fall/It's Too Late: The Legendary Godfather of Ska, Volumes One and Two CD, drops the Phil Spector-like pop string section in favor of a warmer and simpler sound to very good effect. (Check out the July 1980 feature in "Sounds" on Laurel by clicking on the image above. In it, Laurel seems pretty aggrieved that Prince Buster had received more acclaim and attention in the UK music press than he did; thanks to Johnny Reggae for a copy of the article!)

After 2 Tone imploded, Laurel's fortunes waned a bit (though the royalties from UB40's cover of "Guilty" on Labour of Love in 1983--which Laurel had originally written and recorded in 1971 under the name Tiger--certainly must have helped) until a chance encounter a few years later with Gaz Mayall (recounted in his recent book, "Gaz's Rockin' Blues: The First 30 Years," the review of which can be found here), who booked him to play numerous gigs at his "Gaz's Rockin' Blues" club night to a fresh crop of post-2 Tone ska fans. Gaz also had the brilliant idea of pairing Laurel up with an upstart traditional ska group, the Potato 5, who then released two phenomenal singles composed by Laurel on Gaz's Rockin' Records (distributed by Stiff Records): "Mad About You" and "Sahara" (both 1986). Indeed, Laurel's collaboration with the Potato 5 yielded some of his greatest songs, in terms of songwriting, performances, and studio production (read The Duff Guide to Ska review of the two albums Laurel cut with the Potato 5 here). Gaz claims to be the one who coined Laurel's "Godfather of Ska" moniker (and released a compilation of the same title of Laurel's early ska singles on Gaz's Rockin' Records).

(Laurel also had a few of his songs appear on the soundtracks to several major British films, including "Absolute Beginners" in 1986--Julien Temple selected "Landlords and Tenants"--and "Scandal" in 1989, which featured "Love Me Baby" on a soundtrack related to the film, Scandal Ska, compiled by Gaz himself for Mango Records.)

After Laurel and The Spuds parted ways (and the latter calling it quits after a brutal US tour), he hooked up with a new backing band in The Pressure Tenants and forged a very fruitful working relationship with Mark Johnson and Unicorn Records, releasing both new material as well as brilliant compilations of his sixties-era singles (see Unicorn's massive discography here, lovingly assembled by John at Hoi Polloi Skazine). Unicorn had managed to establish a considerable global reach through a series of international ska compilations, as well as licensing albums and EPs from top acts in the US (Toasters, Donkey Show), UK (Derrick Morgan, Potato 5, Deltones, Hotknives), Germany (No Sports, The Busters, Skaos, The Braces), France (Machtoc), Denmark (Napoleon Solo), Sweden (Baby Snakes), Netherlands (Mr. Review), Italy (Spy Eye, Casino Royale, Strange Fruit), and Australia (Late Notes, Just Kidding)--all of which provided Laurel with the means to convert an eager new generation of ska fans scattered across several continents.

While the "Everybody Ska" single (which must have been trading on the UK acid ska fad of 1989) is a bit cringe-inducing, its B side, "Skinhead" redeems things significantly ("When a skinhead walks down the street/every chick heart skips a beat!"--the man sure could turn a phrase). The four-track Sally Brown EP (1989), featured the title track (not quite as robust as the version he cut with the Potato 5, but spectacular nonetheless; Bad Manners also covered it on Return of the Ugly), "Hey Little Girl," "Since You Went Away," and the magnificent and heartbreaking "Rude Boy Dream," certainly amongst his greatest compositions ever ("I dreamt I was the President/Living in a tent/But when I woke up this morning/I was thrown out for not paying my rent/Everybody knows I'm a rude boy/Walking the streets of dreams..."). While not included here, Laurel also cut a live four-track EP with The Loafers titled Mad About Ska (Staccato Records, 1989) and the "Boogie with the Bartender" b/w "She was My Girl" single with The Busters (Weser Label, 1989).

Ringo the Gringo (1990), Laurel's first solo album in two decades (again backed by The Pressure Tenants), recorded when he was in his early 60s (!), is filled with a string of top-notch ska and skinhead reggae tracks, represented here by "I Love You, Yes I Do," "Looking in the Mirror," "Don't Turn Your Back," "Peggy Sue," "Hitch Hike," and the grin-inducing, over-the-top bravado of the spaghetti western-themed (and challenge to Prince Buster) "Ringo the Gringo" ("So you say you are the Cincinnati Kid/and you want me to leave town/Ringo won't leave town/until he gun you down!/Ringo the Gringo!/I kill Jesse James/I kill Billy the Kid/I kill Ned Kelly/and I shot J.R!"). The last track on this compilation, "Bartender," is an excellent version of this tune that I've never heard before, cut with The Pressure Tenants in 1992 that avoids some of the synthesized sound choices that slightly mar some of the Ringo the Gringo tracks.

During the remainder of the 1990s and well into the 2000s, Laurel went on to work with several other labels to release new material and re-issue his classics, including Moon (USA), Grover (Germany), Liquidator (Spain), and even Island Records (he recorded "Rudy Girl" backed by Freetown for Ska Island, the label's 40th anniversary ska comp that featured new recordings of classic 60s tracks covered by Fishbone, The Skatalites, Doreen Shaffer, Prince Buster, The Determinations, Dr. Ring Ding & The Senior All-Stars, The Ska Flames, The Toasters, Ocean 11, Ernest Ranglin, Jump with Joey, Rico Rodriguez, Hepcat, and The Trojans--and recorded and produced by Gaz Mayall). He made guest appearances on albums by groups like The Toasters and Ska Flames, and continued to play incredibly spirited live shows (most notably, several tours of the US during the height of the so-called Third Wave in the late '90s) until his death in 2005.

Laurel's exceptional gifts as a composer, musician, and performer were such that he was able to sustain a successful career for almost half a century, appealing to successive generations of ska and reggae fans world-wide. Anyone who discovered his records treasures them; everyone who saw him perform on stage became a devoted fan for life.

The Duff Guide to Ska Grade: A
Posted by Steve from Moon at 10:20 PM

I thought Voodoo Woman was the last one...I'm not complaining at all I just can't keep up with these reissues haha

I know, there have been a lot of them...though this is the last on Pressure Drop (for now). Laurel's recorded output was really extensive.