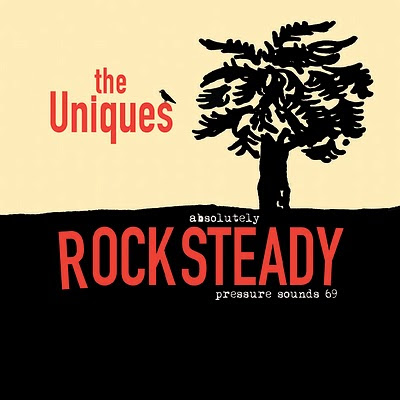 As always, Pressure Sounds continues to drop some of the highest-quality reggae re-issues imaginable. Hot on the heels of the magnificent Sound System Scratch comes Absolutely Rocksteady, a collection of cuts The Uniques recorded with producer Bunny "Striker" Lee in '67-'68. Originally formed out of The Techniques, the version of The Uniques captured here features the vocal stylings of the inimitable Slim Smith (one of the most popular and beloved singers of the rocksteady era), Lloyd Charmers, and Jimmy Riley. The group recorded a string of hits (many of which are included on Absolutely Rocksteady), but disbanded in 1969. (Smith died in 1973 in what appeared to be a freak accident--one night after a party he found himself locked out of his parents' house, so he broke a window to gain entry, but ended up cutting himself so severely on the glass that he bled out before he could be treated--though some have conjectured that he was depressed and let himself bleed to death.)

Absolutely Rocksteady is available on CD and LP through Ernie B's Reggae in the US (I just ordered my copies); the track listing for both formats is listed below: