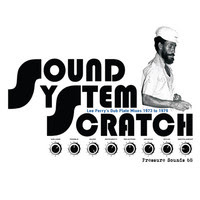 One probably cannot overstate how brilliant and creative Lee “Scratch” Perry was as a musician, performer, and producer during the height of his mind-blowing powers at his Black Ark studio in the 1970s. Completely unfettered by convention (and the assumed limits of his relatively simple recording equipment) and eager to experiment in directions that others had not dared to dream, Perry’s prolific output at Black Ark far exceeds that of most of his then-rivals (now-classic productions from this studio include Max Romeo’s War ina Babylon, Junior Murvin’s Police & Thieves, his own Super Ape, and his masterpiece, The Congos’ Heart of the Congos).

If you’ll forgive the extremely crude and poor analogy (no disrespect meant here), trying to stay on top of Lee “Scratch” Perry’s extraordinary body of work is a bit like attempting to map out the family tree of roaches inhabiting an apartment—you walk into the kitchen one night, flick on the light, and discover that there is a whole new batch of critters crawling out from under the floorboards that you never knew existed (check out Scratch's maddeningly deep and sometimes confounding discography here, here, and here)! Indeed, the rare dub mixes on Sound System Scratch came to Pressure Sounds from a private stash (accumulated over the years) of one-off, exclusive dub plates—thin aluminum discs covered in lacquer—and tapes that Perry had conjured up and sold to various sound system DJs during the 1970s for some extra cash (his bold experiments were sometimes too far ahead of the curve for the record execs and the public, so money was sometimes an issue). Most of these mixes have not been heard since they were last blasted through a sound system’s speakers, well over three decades ago.

Some tracks on Sound System Scratch may be immediately familiar, though they are deconstructed and re-built in many wild and wonderful ways (Junior Murvin’s “Roots Train Number One” is re-versioned as “Roots Train Number Two,” “Dub Organizer” aka “Cloak a Dagger” off Blackboard Jungle Dub is “The Rightful Organizer,” and the essential Scratch rhythm “Bucky Skank” begets “Jucky Skank”). Others will compel you to root through your collection to try and figure out the source material (angels may fear to tread here). But there are many, many genuine gems to be discovered—I was particularly struck by the rhythmically stark and seductive “Chim Cherie" (listen to a version of it here), as well as “Groove Rider,” “Groovy Dub” and “Living Dub," among others. This CD also includes insightful liner notes by Jeremy Collingwood that provide some crucial context regarding the creation of these mixes.

Sound System Scratch is an unexpected treasure trove for Lee Perry fans and another winner from the peerless Pressure Sounds label.

Duff Guide to Ska Grade: A
Posted by Steve from Moon at 6:50 PM

I've got a copy comin to me on Tuesday. I can't wait to hear it. Cloak and Dagger is one of my favorites, I can't wait ot hear another version of it.

Also, I picked up the latest Laurel Aitken reissue on Pressure Drop called Voodoo Woman. It's incredible, all soul and heavy r&b from the mid 60s.

Ain't no hype-this is an amazing collection of rare dubs!

Thanks for the tip about "Voodoo Woman." I can hardly keep up on PD's Laurel Aitken re-issues...

I know man. I now have 5 out of the 10 they've put out. I'm glad they're done now so I can finally catch up. the next two on my list are Fantastic Laurel Aitken and Original Cool Jamaican Ska.