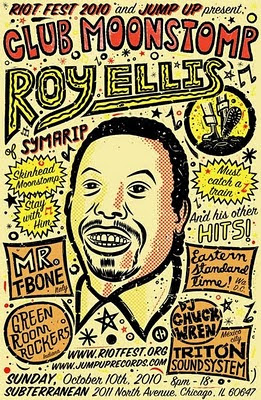 As part of Chicago's upcoming Riot Fest 2010, Chuck Wren and Jump Up Records are presenting "Club Moonstomp," which will feature the legendary Roy Ellis (from one of the greatest skinhead reggae groups ever, Symarip), as well as Eastern Standard Time, Mr. T-Bone (from Italy), and the Green Room Rockers--plus Chuck is spinning wax from his mega-deep collection. This is all going down on Sunday, October 10, beginning at 8:00 pm (18+) at Subterranean (2011 North Avenue, Chicago).

The Toasters, Crombies, and Skapone are also appearing at Riot Fest on Friday, October 8th at Subterranean!

Take note that Jump Up has just served up three new releases:

The Green Room Rockers self-titled, sophomore album full of Motown soul and Kingston reggae is out on CD now (and LP in a few weeks).

Lastly, Babylove & the van Dangos' new Money & The Time LP showcases the band's stunning mix of traditional ska, which is full of energy and soul! It's on yellow vinyl and limited to an edition of 500 copies.
Posted by Steve from Moon at 7:00 AM