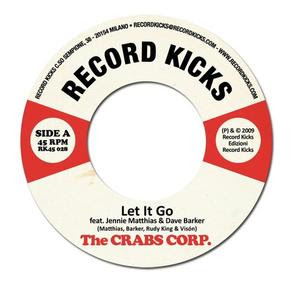 Record Kicks
2009
Available as a vinyl single or digital download

On their fantastic debut single, Argentina's musical powerhouse The Crabs Corporation serve up two slices of ska heaven with some help from Dave Barker and Jennie Matthias. Maybe it's Jennie Matthias' strong association with the New Wave era (she was in the Stiff Records act The Belle Stars and that band had connections to The Bodysnatchers and The Deltones; she's also made recent guest appearances on two Skaville UK albums and is currently in her own ska/reggae band, 1-Stop-Experience), but the crazy infectious "Let It Go" (where Jennie urges an ex to stop obsessing over what went wrong and move on: "Save yourself for someone else/It's much better for your health/Be much kinder to yourself/You've got to let it go") sounds like something that 2 Tone would have released in its heyday (though the occasional dubby effects and exhortations from Dave Barker might make one imagine that Lee "Scratch" Perry had somehow intercepted the master tapes on the way to the pressing plant!). Despite being called "Reggae Power," the flipside is a jazzy, vintage ska instrumental (with a brief dub melodica interlude), but the sentiment is all the same: this music will compel you to move your feet!

The Duff Guide to Ska Grade: A
Posted by Steve from Moon at 7:40 AM