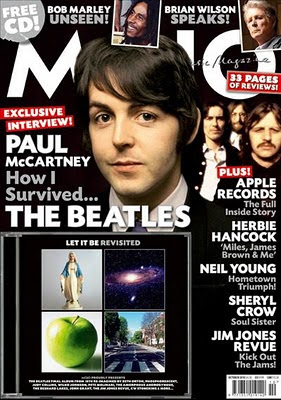 Yep, it's time again to report on MOJO's latest coverage of things ska and reggae. The October 2010 issue, with Macca on the cover, includes a feature on Gaz Mayall's forthcoming book "Gaz's Rockin' Blues: The First 30 Years" (out on September 16 from Trolley Books in the UK). A slew of incredible photos accompanies the piece, including shots of Prince Buster, Laurel Aitken, Lee "Scratch" Perry, Alton Ellis, Joe Strummer, and Joey Ramone, amongst others, either performing or hanging out at Gaz's Rockin' Blues.

Elsewhere in this issue, you'll also find a four-star review of Gaz's book; an obituary for roots, lover's rock, and dancehall singer Sugar Minott, who was 54 when he died; a four-star review of Toots and the Maytals new album, Flip and Twist, which heavy on funk and soul; and some rare, but stunning photos of Bob Marley in his prime by Kim Gottlieb-Walker (which include Bob meeting "Ras Beatle" George Harrison--they were huge fans of each other--and a shot of Bob in front of an formidable pile of ganja with the photographer's three year-old son, who considered himself to be a Rasta at the time).

Check out this clip of Gaz being interviewed about his Rockin' Blues...