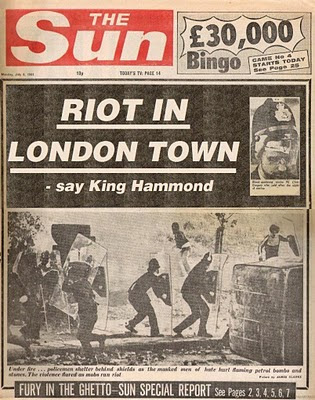 King Hammond serves up another sweet musical biscuit filled with nothing but the finest skinhead reggae on the vinyl-only (!) Riot in London Town EP. This mega-single features two prime cuts (the anti-gun-and knife plea "Cool Down Your Temper" and the Gordon Brown diatribe "Mr. Easy Talk") from his sensational The King and I album (read The Duff Guide to Ska review here), plus two new winners.

The title track seems to hearken back to the days of social unrest in Britain during the late 70s and early 80s (I'll always remember catching footage on the NBC Nightly News of burning buildings and running riots in the streets of several inner cities in the UK, as they played The Specials' "Ghost Town," which hit number one in England that same week in 1981), but Nick Welsh has informed us that it's about how the powers that be are tearing down large chunks of London--often places dear to his youth--and replacing them with horrible modern buildings (a skinhead reggae architecture critique!). Nick also claims that "Chicken & Chips" is about his love for this type of fast food. However, with King Hammond's naughty tendencies in mind, one could come to think that the song refers to a lesbian--it's all how you interpret lyrics like this: "That girl just eats chicken and chips/She won't put nothing else to her lips...She used to be finger lickin' good--better than the rest/Now the thing that turns her on is leg or a breast." (But then, it could be simply about a girl who eats too much fried chicken and gets fat!) Love the chicken clucking samples, KH! Gimme fried chicken, indeed.

Duff Guide to Ska Grade: A
Posted by Steve from Moon at 12:30 PM