While the majority of "Gaz's Rockin' Blues: The First 30 Years" is devoted to three-decades worth of his completely fantastic DIY gig/club night flyers (hand-drawn and lettered, with graphics nicked and pasted from EC horror comics, MAD Magazine, and 50s pin-up girlie magazines), one of the biggest treats is Gaz's smart, funny, and matter-of-fact recounting of his professional life's story. Even though I've been a fan of his band (The Trojans) and label (Gaz's Rockin' Records, whose roster included The Potato 5, Laurel Aitken, and The Ska Flames) since the late 80s, I was totally unaware of the genesis of his club night and label. In particular, since Gaz's rise to ska prominence took place during the pre-internet age, there is little out on the net about all this, so it's all the more important to relay the account of his adventures in music (a classic success story of following one's passions and creating one's own opportunities) here.

Gaz's shop, which he opened in autumn 1978, sold Jamaican ska and reggae singles and long-players (which were also played on the stall's sound system), and the vintage clothing ("...that had been denied me as a kid," writes Gaz, when he became a fan of reggae music on the football terraces in the late '60s/early 70s) that budding mods and skinheads needed to properly deck themselves out in the correct fashion. As Ken Market was located across the street from a large school, Gaz's shop quickly became the hot spot for youth seeking the coolest musical sounds and vision. Up until this point, Gaz had been following his own interests in fashion and music (he describes his stall as an "Aladdin's cave of every rebel youth culture since the war")--with great popular and financial success. But then, UK pop culture caught up with him with a vengeance. In the spring of '79, The Specials and 2 Tone literally swept the nation, which opened new doors for Gaz to walk through, while nailing others shut.

Through his shop, Gaz had become friends with the newly-formed Bodysnatchers and he co-wrote "We're Ruder Than You" with Rhoda Dakar. He was invited to DJ at an un-hip nightspot called the Two-Tone Club, which was a complete smash, as all of his friends and shop followers showed up to drink and dance. However this gig was short-lived, as a fight not started by his compatriots is blamed on them, resulting in all skinheads being permanently banned from the club.

The 2 Tone mania spurred all sorts of fierce competition--he was no longer one of the few outlets for rude boy threads and wax. Demand skyrocketed, but securing his stall's supplies became much harder. Gaz began to have great difficulty locating vintage mod and skinhead gear that could be offered at reasonable prices to his young customers (plus, wanting to capitalize on this resurgent youth fashion craze, companies like Ben Sherman began reproducing their designs from the 60s, eating into the vintage market even further). As his shop's prospects began to dim, Gaz was offered another shot at DJing at a club from someone who frequented his stall. His stint at Gossip's was so successful, that he was able to strike a deal for a regular club night--Gaz's Rockin' Blues, where he spun ska, reggae, blues, soul, rockabilly, boogie-woogie, and early rock 'n' roll--that would earn him more in one evening than he took in at week in his shop. Freed from the daily grind of earning a living through retail, Gaz was then able to focus fully on his musical pursuits.

Through his club, Gaz came into contact with a rockabilly trio from NYC in need of a gig, so he set one up: his first foray as a promoter through Gaz's Rockin' Blues was for The Stray Cats--though live performances would not become a regular component of his club night until several years later. In 1984, a connection from his school days led to an opportunity to interview Prince Buster for the publication "Black Music International" (Buster was in the UK for the first time since 1967 for Britain's first Reggae Sunsplash--also on that bill were The Skatalites, who, up to that point, had never played England). Gaz and Buster hit it off so well that Buster changed his travel plans, staying in London for several months (they've been close friends and collaborators ever since; Buster cut a 12" single for Gaz's label--"Stack-o-Lee"--and Gaz produced the essential King of Ska Prince Buster comp). During this time, Gaz assisted Buster in tracking down his back stock of Blue Beat singles (Melodisc owner Emil Shallit had died in 1983), and Buster connected Gaz with Desmond Dekker (who played Gaz's Rockin' Blues on December 20, 1984) and other 60s-era Jamaican musicians residing in the UK. Gaz also arranged for Buster to have dinner his friend Joe Strummer, who was "gobsmacked" by the prospect of meeting Buster when Gaz called him to set it up. 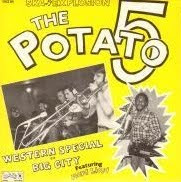 Around 1985, a chance encounter with The Potato 5's drummer led Gaz to take on the role of their manager, after being impressed by their live act and learning about their difficulty in gaining any traction in the music business. Gaz was able to broker a deal with Stiff Records to co-release The Potato 5's first single ("Western Special" b/w "Big City") in 1986 on his new Gaz's Rockin' Records imprint, which was followed by the Ska Explosion four-track 12" ("Spin on Your Head," "Jesse Jackson," "Tear Up," and "Big City") with Floyd Lloyd Sevright as their (temporary) singer. Stiff Records then split with Island Records, which put their deal with Gaz's Rockin' Records up in the air, so Gaz forged ahead with his label on his own.

The same schoolmate who introduced Gaz to Prince Buster put him in touch with Laurel Aitken. After booking Laurel for a few gigs at his club and having him check out The Spuds (AKA The Potato 5), Gaz played matchmaker for a brilliant musical marriage: Laurel needed an ace backing band and The Potato 5, which had a young, enthusiastic audience unfamiliar with--but primed for--someone of Laurel's talent, needed an exceptional frontman/singer. This partnership immediately yielded two classic Aitken-penned singles: "Sahara" b/w "Long Time (I've Been Watching You") and "Sally Brown" b/w "Mad About You" (all of which were collected on the Floyd Lloyd and The Potato 5 Meet Laurel Aitken LP). 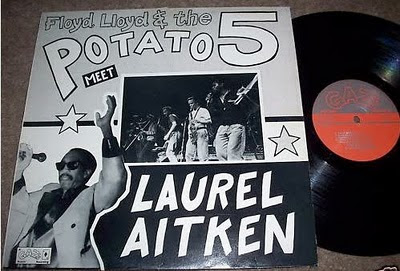 In late 1986, Gaz formed The Trojans (who released the excellent Ala-ska, which showcased their wild mix of ska, reggae, worldbeat, and Celtic music). He also arranged what was a smash, sold-out tour of Japan for Laurel Aitken and The Potato 5. On this trip, Gaz came in contact with The Ska Flames, who later signed to Gaz's Rockin' Records and toured the UK. Indeed, as Gaz's professional involvement with the UK and global ska deepened, the focus of Gaz's Rockin' Blues shifted heavily in favor of live ska acts. During the mid-80s to early 90s skaboom, every significant UK ska artist performed numerous times at his club, including The Deltones, The Loafers, Bad Manners, Maroon Town, Laurel Aitken, The Potato 5, The Trojans, The Forest Hillbillies, The Hotknives, 100 Men, The Riffs, and more--plus many of the Jamaican greats such as Alton Ellis, Delroy Wilson, The Pioneers, Derrick Morgan, Lee "Scratch Perry, and Rico Rodriguez.

Gaz's Rockin' Blues was vital to the post-2 Tone UK ska scene, as it was a welcoming, devoted, and supportive home base that saw the music and fans through good times and bad. (And Gaz's Rockin' Blues continues to show its love for ska: recent bookings have featured No. 1 Station, Babyhead, Roy Shirley, The Aggrolites, Dave Barker, Winston Francis, Dennis Alcapone, Skaville UK, Pama International, and Babylove & the van Dangos.)

As an historical document, Gaz's book is priceless--ephemeral and long-forgotten information about an entire era of the ska scene is collected in this beautiful visual record. Where else can you find out when was first time The Deltones or The Toasters played Gaz's Rockin' Blues? (Answers: December 19, 1985 and June 1, 1989, respectively.)

Whether you are a compulsive collector of ska paraphernalia, have an academic interest in this particular scene, or were in the crowd at one of Gaz's shows all those years ago, you'll definitely want this book.

The Duff Guide to Ska Grade: A
Posted by Steve from Moon at 2:01 AM

Greta article, I have always wanted to visit England and go to Gaz's club. BTW, is the club in the following video for the English Beat Gaz's Rockin Blues? I believe Gaz makes an appearance at 10 seconds in but have not been able to confirm this anywhere?

Good question, Matt. Gaz is definitely in The English Beat video, but I have no idea where it was shot. If I have the opportunity to ask Gaz, I will.

Thanks! The book is really fantastic, isn't it?