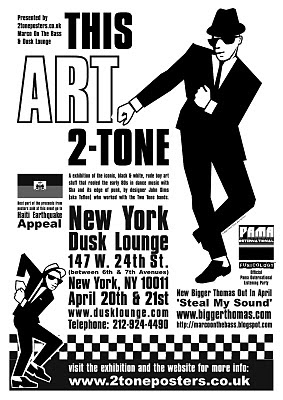 On April 20 and 21, to celebrate and serve as an after-party for The Specials' two NYC shows at Terminal 5, 2 Tone Posters, Marco on the Bass, and Dusk Lounge are presenting This ART 2 Tone at Dusk Lounge in Chelsea, showcasing posters that were designed by John "Teflon" Sims for 2 Tone Records. Full-size prints of several of his more popular posters (see some of them below) will be displayed and postcard-size versions of the posters will be offered for sale--with the proceeds going to the Haiti Earthquake Appeal.

Since Lynval Golding and Sir Horace Panter are involved with the new Pama International album, this event will also serve as a playing party for Pama Outernational (arranged through Jason Lawless of the Lawless Street blog and Gabe Pressure of Dancing Mood and Musical Occupation) and there will be lots of CDs and swag given away, too. Pama Outernational is being released on Lawless Street Records in the US this April. (The Duff Guide to Ska hopes to post an interview with Sean Flowerdew soon!)

While we're plugging new records, Bigger Thomas' new album Steal My Sound is also coming in April--and from what I've heard promises to be one of the best ska releases in 2010.

You can bet that there will be loads of ska scenesters, musicians, and even an unexpected VIP or two at the This ART 2 Tone after-parties, so make sure to be there! 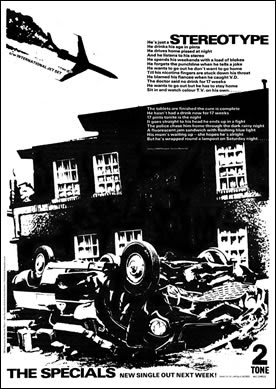 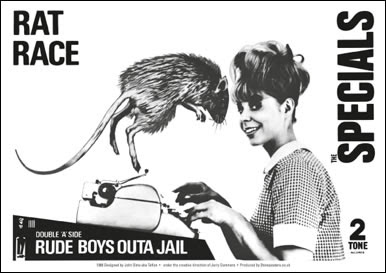 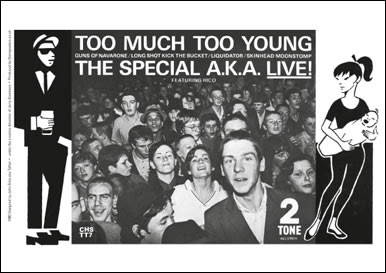 I was just reading about this on facebook a few hours ago. I will definitely be there.

Can't make the first night, but I'll be at the second, really late, though...