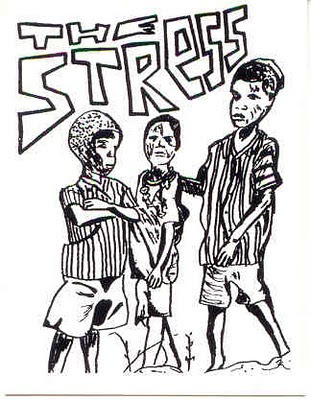 The Stress are an extraordinary rocksteady crew out of Providence, RI that now counts The Duff Guide to Ska among their biggest fans. The band is comprised of Mike Mowry on vocals and organ; Dave Deprest on guitar and vocals; Johnny McMahon on bass; and a round robin of drummers: Ian McMillan, Jesse Hayes (of Void Union and The Toasters), and Brenden Deprest. The Stress' first EP, "Muk! Muk!" (read The Duff Guide to Ska review here) is available as a free download--details are listed below--and all of the EP tracks, plus a new tune, can be streamed on The Stress' MySpace page.

We really appreciate that Mike Mowry took the time to put his fingers to the (QWERTY) keyboard and provide us with some thoughtful and provocative answers to our questions. Like we wrote in our review of "Muk! Muk!," The Stress are rocksteady with an edge. And we love it like that!

The Duff Guide to Ska: Apart from the band's name, what is "the stress" and how can we relieve it?

Mike Mowry: It's the struggle: the existence and support of systems that disadvantage one to the benefit of another; for instance, trade disparities between the world's most wealthy nations and the world's developing countries; government-backed wars and military incursions about which citizens are voiceless; the death of American manufacturing and the rise of outsourcing and "free" trade; the shit-end of the stick for American labor; the harsh realities for small farmers (worldwide) competing against agribusiness; the consolidation of our food systems; the death of regionalism and the rise of corporate feeding troughs and outlet malls. It's vast and daunting...the relief is somewhere close to where awareness and outrage meet action and change.

That being said, we also have a few love songs.

DGTS: "1994" is about NAFTA's devastating impact on farmers in Central America; the singer/narrator in "What Cheer?" is homeless and struggling not to freeze to death around Christmas; and your MySpace page assures fans that your shirts are union made and alerts people to the fact that most chocolate products sold in the US involved child slave labor at some point in the harvesting of the cocao beans. Where does the band's focus on social/economic justice come from and what inspires you to fight the power(ful corporations, etc.)?

MM: Our focus comes from many different places, and I think each of us would give you a slightly different answer on that. I would say that we, The Stress, try our best in terms of being conscious of the things we do and who we are supporting by our actions, especially in terms of consumption. In any transaction, there's power in knowing where the money is being exchanged along the supply chain, and--as consumers--we are the end of the line; our power lies in the ability to refuse products which have gotten to us through unjust means. For me, this means that knowledge is the inspiration, and music is the means of channeling that inspiration.

DGTS: How did the band come to the decision to offer your "Muk! Muk!" EP for free downloading through Community Records and Witty Banter? (And what does "Muk! Muk!" mean, anyway?!?) Do you ever intend to release music in more tangible formats?

MM: We had finished recording Muk! Muk! and were planning on releasing it ourselves as a CD, when our friends Stuck Lucky (a well-travelled Nashville punk band who works with Community Records) came through Providence on tour. They had good things to say about Community. We were new at the time (unknown), and weren't really looking to make loads of cash from the CD, plus we had recorded it ourselves at Dave's studio (Sea Level Sounds), which saved us from paying for studio time. So in hearing that people could go to the Community Records website to download free albums, we decided to talk with them. Instead of scrounging around for money to press the album, we figured we might as well give it away and get our music to as many people as possible, and we are thankful to Community Records for putting the album up on their site. Shortly after that, Shaun from SBT (an RI punk band) started Witty Banter Records, which also has free downloads; for the same reasons, we jumped at that opportunity. We have been working a lot recently on writing and recording a full-length, and will be putting it out in CD and vinyl formats when the time comes.

As far as I know, "muk muk" means something like "short" in Tzotzil, which is one of several Mayan language spoken by many indigenous peoples in Chiapas, Mexico. I visited Chiapas a few years ago to learn about coffee farming and producer cooperatives. When there, the people in the village we were visiting, called Once de Febrero, kept calling my friend "muk muk". Every time we'd say it, everyone would start laughing, it was great. For us, and the families in Once de Febrero, Spanish is a second language, so sometimes the translations would get murky. We liked the way it sounds, and figured it ties back into "1994", so it seemed fitting to use for the EP name.

DGTS: What are your thoughts on music file sharing?

MM: I might not have a definitive answer on this. On the one hand blah, blah, blah... On the other hand musicians work very hard to write, record, release, and market their music, and that should be respected. For Muk! Muk!, we figured we were new, no one knew us, and so we might as well just give the thing away and get the word out. Which means please burn it for your friends.

DGTS: What is the Rhode Island ska scene like? Any bands that should be on our radar? Which is better to play, NYC or Boston?

MM: The RI ska scene is a little worse for wear. There are some good, long-running bands here that have been doing there thing for quite a while, and we respect that. Shows, however, have been hit or miss. As for Boston or NYC, that seems like the perfect question for someone in Rhode Island to avoid.

DGTS: How did you "discover" ska and rocksteady music--and what inspired you to form a band? Do any of you have formal music training?

MM: My first ska album was Hepcat's Scientific. Which led me to find out where ska came from, which led me to The Skatalites' Hog in a Cocoa. That sealed my passion for Jamaican music. Of course, as a musician, I just had to learn how to play and write within Jamaican rhythms. I had piano lessons for around 13 years as a kid, and Dave and Johnny also had formal lessons as well. On a sort of side note, writing is a real passion for us, and for the next album we are going to be looking in some new directions. We have various musical interests; a lot of old country music, garage rock from the 60's, old R&B, on and on. We intend on releasing more things in that vein alongside the reggae and ska songs on the next album.

DGTS: What bit of band trivia should every fan know about The Stress?

MM: We once rowed a 6-foot dingy, aptly named the Dude Cruiser, to an island bird sanctuary in the bay in front of Dave's house. The seas were high. Dave was rowing, Johnny was manning the bow, and I was bailing water from the bottom of the boat with my shoe. We had no idea that the winds were going to pick up; the waves too. It was all very dramatic, like George Washington crossing the Potomac.

MM: 2010 is the year for a new Stress release. Writing and recording are the main focus right now, but we will be gigging as well. Right now we don't have any plans for touring, but they may very well change.
Posted by Steve from Moon at 8:02 PM

Email ThisBlogThis!Share to TwitterShare to FacebookShare to Pinterest
Labels: Duff Interview, Hepcat, The Skatalites, The Stress, The Toasters, The Void Union