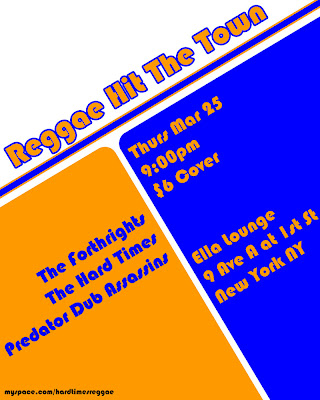 Apologies to Bob Timm and The Hard Times--I meant to post this gig info from him much earlier this week...

REGGAE HIT THE TOWN!
Classic early reggae and soul are set to collide with Rasta roots and dub this Thursday in the East Village.

What's All This About Dirty Reggae?
2009 and 2010 have seen a worldwide resurgence in the love for early reggae and ska, as made popular during numerous revival scenes over the years, from the 70s skinheads to the 90s ska explosion. More recently bands like The Slackers and The Aggrolites have spearheaded a new love for what's collectively known as "dirty reggae" - classic skinhead skank reggae mixing an equal love for Jamaican rhythms and American roots and rock sounds from 60s surf and soul to 70s funk and grit. There are bands popping up all over the U.S. and Europe grinding out this style and New York is well-represented in this scene by bands like The Forthrights and The Hard Times.

The Forthrights are a young crew of punkish reggae lovers who crank out gem after gem of pop-friendly tunes like their Stubborn Records single "Other People." Listen to The Forthrights, though, and they will equally point to The Hard Times as New York's powerhouse early reggae band. The Hard Times are a 5-piece instrumental reggae tsunami, delivering blistering renditions of Upsetters classics and their own surf-garage-samba twist on all-killer original rhythms.

Righteous Dub
The Hard Times and The Forthrights take major influences from early reggae from the 60s to 70s, with a good dose of dub and roots. They are proud to be uniting the worlds of reggae at Ella Lounge, and performing with Predator Dub Assassins. PDA have been assaulting the east coast dub syndicate, touring and appearing regularly in their NJ base, developing a formidable Dub Army of fans.

Whatever your taste in reggae, you are sure to be energized and enlightened by the mix of soul and rhythms being served up this Thursday at Ella Lounge.

More info: hardtimesreggae@gmail.com
Posted by Steve from Moon at 7:54 PM