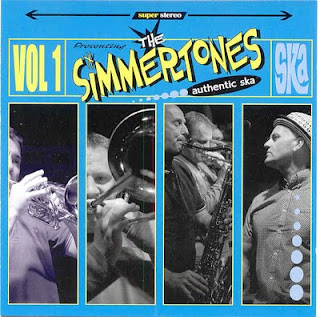 Based in Devon, England, The Simmertones are an ace trad ska act that has been playing out in that part of the world for around two years now. Their style of Skatalites-inspired vintage ska, as captured on the seven-track EP "Presenting The Simmertones, Volume 1" (recorded and co-produced by Richard Digby Smith, who as an Island Records engineer worked with the likes of Bob Marley, Led Zep, and Sparks), reminds one of NYC's Scofflaws in their fantastic prime (when Mike Drance and Victor Rice were in the band) or Germany's unstoppable ska powerhouse Dr. Ring Ding and the Senior All Stars. Like both of those bands, The Simmertones' performances are full of verve and creativity that underscore a keen understanding of and deep respect for the musical genre they are operating within.

The Simmertones completely nail several covers of 60s ska classics here: Justin Hines' "Over the River," The Skatalites' "Ball of Fire," and the traditional "Sammy Dead"; and--as The Scofflaws did on their debut album--they throw in an incredibly inspired choice of non-ska cover: the "Dr. Who" theme song. Every time I hear it, I have flashbacks of watching the show in the early 80s with Tom Baker dashing around in his super long scarf--I had no idea what was going on half the time, but it was compelling and freaky and I couldn't look away! (While I'm on the subject of British TV theme songs, somebody out there has to do a ska cover of Laurie Johnson's kick-ass theme for "The Avengers"--Diana Rigg in leather catsuits, yo!)

More significantly, The Simmertones' original cuts measure up in quality to the classics: the proudly strutting love song "One Time Soon" (which they note borrows a Skatalites horn riff from "African Beat"); the longing, reggae-ish "Warm My Bones" (one's lover as the metaphorical shelter from the storm of life); and an encouraging ode to self-reliance "Do What You Got To Do" ("Don't live your life in another man's shoes/Do what you got to do/and it will see you through"). All very good stuff.

Be sure to keep The Simmertones on your radar--this is a terrific debut and we can only hope that there's much more to come.

The Duff Guide to Ska Grade: A-

(Update: Thanks to John at Hoi Polloi Skazine for getting in touch and pointing out that The Avengers theme has received at least one ska treatment: The Butlers covered it on their "Time Tunnel" album in 1994. Any others?)
Posted by Steve from Moon at 5:02 AM

Email ThisBlogThis!Share to TwitterShare to FacebookShare to Pinterest
Labels: Dr. Ring Ding and The Senior Allstars, Duff Review, The Scofflaws, The Simmertones, The Skatalites

I liked this release as well!

hey guys, thanks for this, really good that you get what we've been trying to do, appreciate you taking the time to listen and write about us.

Thanks for the feedback, Rich! Keep us in the loop--we want to know what you are doing and where you are headed (musically) next!

are you on Facebook Steve? we stick news on there and we've been working on some videos, etc