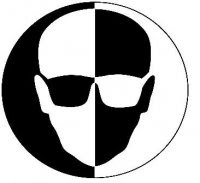 Over the weekend, I met up with Marc Wasserman, bass player for Bigger Thomas (and 2 Tone/80s ska-obsessed blogger Marco on the Bass), at Dusk--a bar in Chelsea with a ska connection: one of its owners used to be in the A-Kings (hear them on the original 1985 New York Beat Moon comp) and Thick As Thieves (featured on Ska Face and the Francis Ford Coppola-directed segment of the 1989 movie "New York Stories"). Marc and I were discussing an upcoming ska event that will be announced via both our blogs in the near future--and he was nice enough to hook me up with a three track preview CD of Bigger Thomas' new album, Pure.

Produced and mixed by King Django at Version City Studios (he's putting the final touches on it right now), this 10-track album, which has been gestating for a few years, features guest appearances by Roy Radics from The Rudie Crew (chats/toasts); Django (melodica and chats); and Dave Barry of The Toasters (organ/keyboards, of course!). Plans are to have the album art designed by John 'Teflon' Sims, who created an extraordinary number of iconic images for all of the bands signed to 2 Tone Records when he worked in the Chrysalis Records art department.

Bigger Thomas are contemplating releasing Pure on-line as a pay-what-you-wish digital download (a la Radiohead) via Marc's blog, as well as through iTunes, eMusic, CD Baby, etc. The band also intends to release either the full album on vinyl or a few of its cuts on a 7" single through their own Exclamation Point Records (the vinyl will be pressed in Jamaica through Django's contacts there).

The three Pure tracks that I've previewed sound terrific. "Crown Victoria" is a tongue-in-cheek, laid-back ska ode to trombonist Chris Malone's late model American car that, despite the connotations of its name, is not a mode of luxurious transportation back and forth to gigs ("The Crown Victoria/You are my joy and pride/The longer the trip, the rougher the ride/Is that smoke beneath the hood?/You know that can't be good...). "Permanent Error" is a soulful reggae-ish lament (warning?) about e-mailing under the influence. "Kings of the Klub" is a battle between Roger Apollon, Jr. and Roy Radics for toasting and boasting supremacy that reminds one of The English Beat ("Pato and Roger a Go Talk"), The Untouchables, and even a little Fishbone--and is thoroughly enjoyable.

All of these cuts bode really well for Pure, which promises to be a smash ska release for 2010...
Posted by Steve from Moon at 6:30 PM

I like the ideas about releasing records only online/mp3s and on vinyl, though I am not sure whether fans who still buy cds (and there must be some) would feel left out.

Man.. I can't wait to hear about this event